We have all in one way or another have already spent holidays shopping, but most of us who are very busy, probably resorted to buying most of our gifts online. People have learned to take precautions especially if the money spent is hard earned - and this case of Ms. Maricar Banaag would be a nice thing to learn from.

A lady online seller on Facebook is currently facing estafa charges for selling a diamond ring with inadequate carats. In a complaint affidavit Ms. Maricar Banaag filed via the Parañaque Prosecutors Office, she says "Ms. Daisy Borja offered through a live selling video a ring specifically representing that the diamond was 1.25 carats in weight but it turns out when I got it weighed with my setter, it only weighed 0.71 carat." 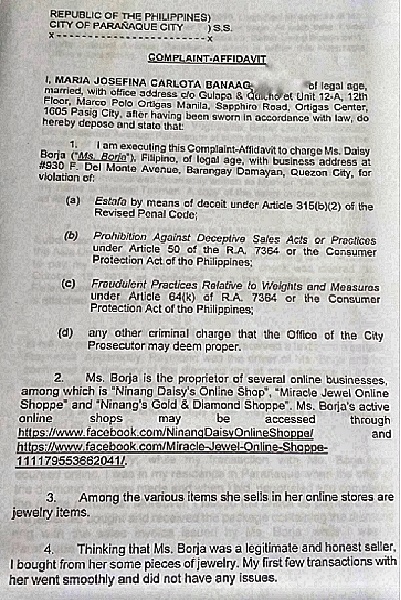 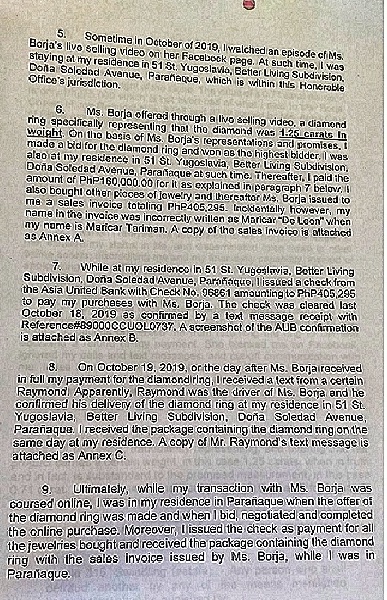 She states "I made a bid for the ring and won as the highest bidder. Paid for it via a check Php 405,295 which includes the Php 160,000 for the diamond ring. The check was cleared October 18 and got it the day after."

According to her, when she sought Borja's attention she was expecting her to be agreeable to talk, apologetic and consider a refund but instead, she was met with profanity. She adds "I was then blocked on Facebook, she also ignored my calls and text messages. The manner of Ms. Borja's actuations prevented me from returning the ring to her and get a full refund." as stated on her affidavit.

She also states that Borja has different pages such as Ninang Daisy's Online Shop and Miracle Jewels Online Shoppe to sell products. Borja is currently facing charges of Estafa and violation of Article 50 and 64 of Republic Act 7364 (Consumer Protection Act of the Philippines) which prohibits sale through deception.