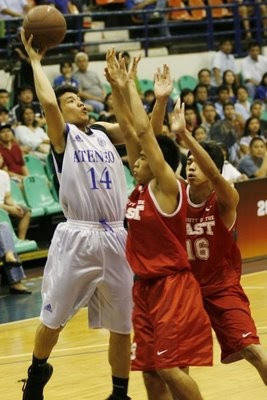 Chris Tiu and 2 warriors battle out for the ball
It all ends here UE! as Ateneo wins 70-50

I am disappointed but really who wouldn't be as the UE Red Warriors suffered a heart wrenching loss to favored Ateneo Blue Eagles in the Final 4 playoffs in the UAAP.

It was a whole game of turnovers, turnovers of turnovers, airballs and veterans not stepping up as the mighty Ateneo clawed the skins of the UE Warriors. Congrats Marcy and Llagas... and the others as well... Let's just try next season!

Well what can we do... we are only spectators.... we stayed with them till the end but still... we did not win... Ateneo just played better... that's just it... next year... and the next after that... we'll just hope something good's gonna happen.. till next season.... hey! it will happen! ^_^ you know the drought will end... GO FIGHT RED AND WHITE!

The journey of UE temporarily ends here. Some seniors will cease to exist next year and the start of something else. I hope its more than this though... I know we'll win the Championship even if its ON season! We are hungry for it! I believe! Go UE RED Warriors!