Yes it's true! The first ever winner of The Apprentice Asia is Jonathan Yabut from the Philippines.

Big dreams really come from small beginnings as this executive from Glaxo Smith Kline based in Manila bested 12 other contestants from the Asian region. We were there to cover the event and saw the other hopefuls too. Andrea Loh from Singapore was also there, she was the one which he had to battle with during  the last episode. The last task was not too easy either as they had to launch the AIR ASIA FOUNDATION which caters to Asian historical entities and funds various organizations and individuals that can nurture entrepreneurship within the region. It basically cares for those who are in need. It's Mr. Fernandes' vision of giving back to the same people who helped him build his empire. It's a noble gesture imho.

During the last battle, Andrea was a little nervous and got that in the way while speaking in front of dignitaries and VIP's that were invited to an auction. Jonathan on the other hand took the upper hand right from the beginning and chose to personally talk to each and everyone ultimately connecting with the audience and made Mr. Tony Fernandes choose him as the ultimate APPRENTICE ASIA winner! :)

Congratulations Jonathan! Thank you for making the Philippines proud!

I'm really no stranger to this. I bet even my sister would qualify for this stint. A few days ago, they just concluded the SM Plus Size Model Search Year 2. They announced the winner already and it's Ms. Barbara Bang. She's the one on the left most part of this photo. She also wins a modeling contract to represent SM's new brands called Jus' Ur Size and Jus' Jeans. It's so nice for SM to hold things like this and take a different look for plus sized individuals who have it, and ultimately flaunt it. Beautiful and proud of their figure, this embodies something that Filipinos should definitely never discriminate against. It's probably one of the reasons why SM did this search and have done it yearly.

Now, they have lots of choices. I understand what women go through because it's actually the same thing for me. Being of foreign descent, I often don't have sizes available in malls because they always carry the normal Asian size. I usually get European and American brands and I sometimes couldn't find one that fit in regular stores. My sister would be happy they have these available:

Jus' Ur Size and Jus' Jeans

Seeing what they have released for these two brands, the variety impressed me. Being plus sized shouldn't mean they do not have to be fashionable. Case in point...

Now they have prints, draperies and lengthy dresses that hugs the right spot and puts emphasis on the female form, the plus sized way. You now have choices, you can express your fashion sense with these pieces... mix and match it with your current ones in the closet without batting an eyelash because your basics are covered, and you have some of the nicest designs available in RTW that's made just for you!

Thank you very much to SM Ladies Fashion for empowering and inspiring plus sized Filipino women all through these years. I wish my sister can join this contest and give these women a run for their money hehe or else, I think the next step is to hold a modeling search for plus sized Men like me haha I just had to say that!

Again, congratulations to the finalists and the grand winner Ms. Barbara Bang for being SM's newest brand ambassador. I hope you let me tag along when you get to Korea which she won in this contest too! :)

For more information about these clothes and the search

It's near, it's very near! Thai superstars - lovers Mario Maurer and Baifern Pimchanok will be here on August 4, Sunday 2pm in SM City North Edsa and 5:30pm at the SM Mall of Asia Atrium. Those who hold Penshoppe VIP cards will get the chance to win VIP passes and a photo op with these gorgeous pair just by being one of the top 50 shoppers based on the total amount of purchases made from the time they have received and used their cards until  July 30, 2013. It's easy to get close and personal with these endorsers now if you patronize Penshoppe. You've got only a few days to make it to the fan conference so make sure you get those clothes, jeans and accessories so you can be one of them!

Remember to present your cards before paying so you can have your purchases validated within the promo. Winners will also be announced on  August 1, that's on Thursday 6pm at Penshoppe’s official Facebook and Twitter accounts. Don't just stand there, get your discounts and cool clothes from Penshoppe now to make sure you're there when it happens on Sunday!

For the full mechanics, please visit their official website

It's confirmed and BENCH just announced, we have a specific date now. It's going to be on August 17, 2013! 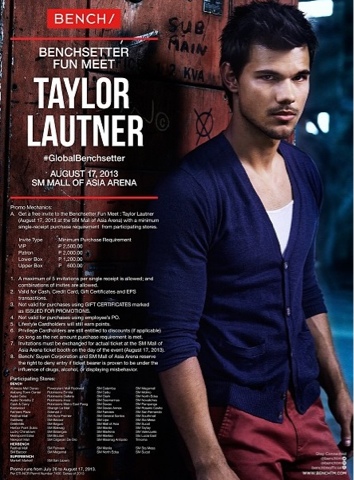 Venue will be at the MOA Arena probably around 6PM which most Bench shows have been in the past. I can't wait to cover this show for you guys and gals! If you can't afford tickets, don't worry because BENCH is also giving away some of it through promos so visit the official website or follow them on Twitter for more details. Who knows, I might give away some tickets too on my @kumagcow twitter account!
Posted by John Bueno at 2:42 PM 4 comments

It's one of the most ink efficient printers that I've ever seen in the few years that I've been in the IT industry. This would be a perfect thing to have in small office/home office and with it's features, you already have saved a ton since it's a multifunction printer.

It's a Network Printer, Scanner, Fax Machine and Copier all in one. I actually got stumped because when I took out the cartridges to replace it with the new ones, the supposedly empty ones still had some ink on them. This pretty much made me think, did the previous reviewer use it for his photos? Then why did it still have ink on them? The box says it all, this one's Ink Efficient!

I was getting very good quality prints the last time I did it on the MX527 even on fast settings; but this time, I thought about it and see what will happen if I'll take my time and see a more detailed one when printing. Although I've been doing A4's previously, I tried the small ones too. On theory it'll take about 50 seconds. But with the time I measured, it pretty much took less than that. Impressive.

Now watch how I do it while printing out my first photo off the Canon Pixma E610. This is on A4 size so it'll take a couple of minutes.


What's also neat is that this particular print out is part of system called ChromaLife100. If you hate things that would only last you a couple of decades, this one is better. It won't fade, change color or do  anything weird in a hundred years. Theoretical of course, and under perfect conditions.

You can also install the "My Image Garden" software that comes with the printer if you want something fun. You can use it to create collages, frames, your own calendar or even spruce up old photos in one tool. It's simple and you can learn about it in a few minutes, so you don't really have to put so much fuzz about it.

Design wise, I think they wanted a sleek black exterior. This one doesn't have anything hanging out unless you put out the paper tray. Folding it in would just make it fully fit and clean. Black is sexy, more like a car.

And as you've seen on the video, it was easy to change cartridges. My only blunder was the part where I thought the cartridge was supposed to be upright. I should have just slid it in.

The Fax machine in this multifunction printer is quite intelligent too. It'll ask you to input the number twice so you won't be making errors sending the document to the wrong recipient.

Scanning on this piece of hardware is pretty good. It served me well because it's smart like the other model. It gets all the details on a single run. Amazing!

Just look at the celebrities that I shot and printed out in a very detailed way. Even the not so sharp ones still felt very nice. I showed it to my folks and they even want their photos taken by me now. Thanks for all the memories, the celebrities and artists that have graced my camera. It was made extra special by immortalizing them on photo paper, printed out in one of the best photo printers in the world. This is CANON Pixma E610. It retails for around Php 5995.00 on stores in the Philippines.