I like what I see every time I go to a HUMAN clothing store. They've got some of the edgier stuff that isn't quite worn regularly on the streets. Something bad ass, something unusual and advanced when it comes to street style. This year's Spring Summer 2015 collection is a bit special as they have collaborated with Tokyo based Filipino designer Johann Manas. His lable JMAN has been dressing up stylish gentlemen and women in Japan and Manila; and has been quite lauded in combining textures, patterns in mostly monochrome. He created a line specifically for this collaboration inspired by an Andy Warhol exhibit which happened in Tokyo. It was quite colorful this time and I bet you'll like what you're going to see! 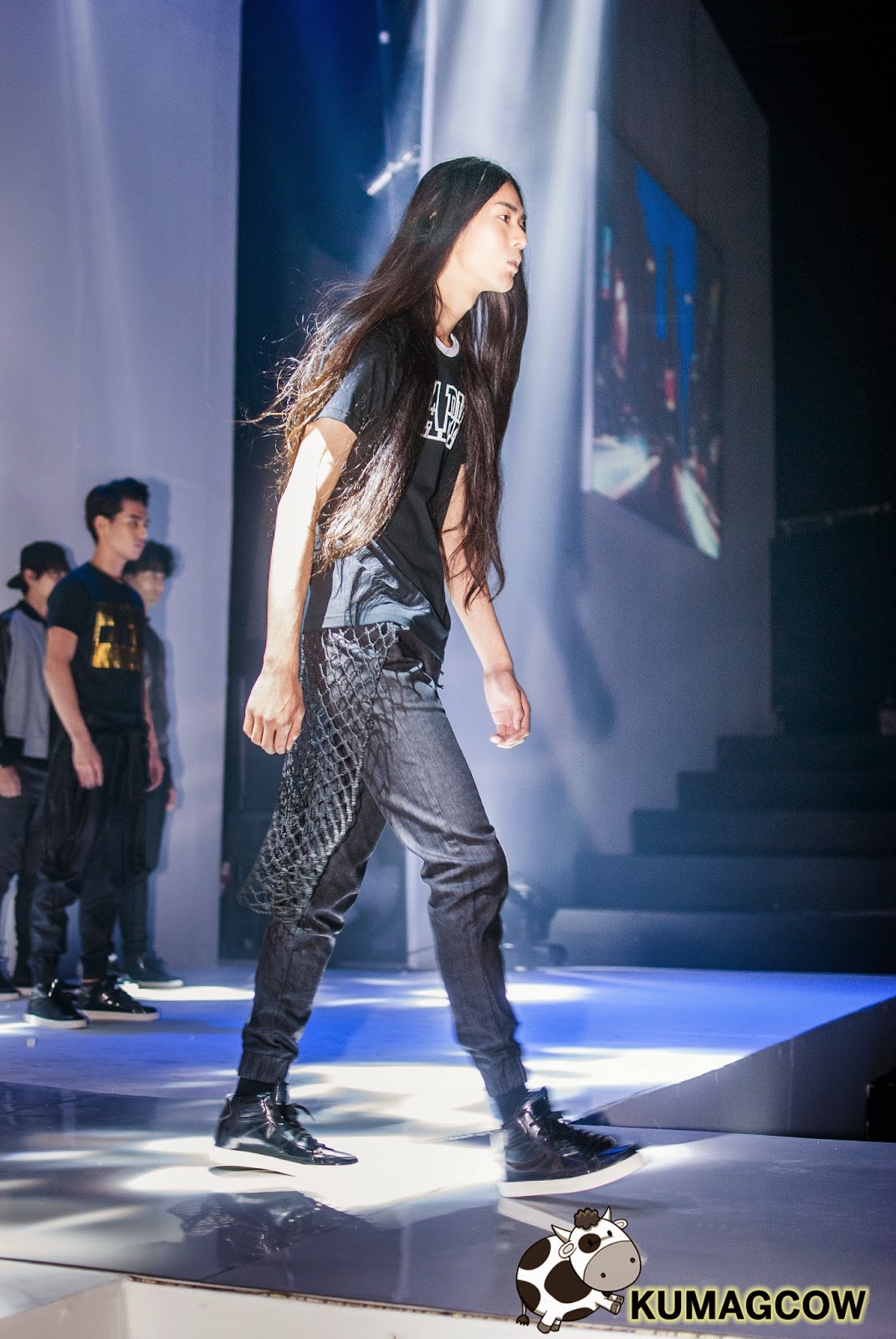 They flew true blue Japanese models in and one of them opened the show. He's Ko Nakano who looks so cool in this ensemble and his jet black long hair. He is the face of JMAN x HUMAN after all!

I love the high quality textured pants; and the shirt designs reminds me so much of a Japanese dance group. Taking a black shirt and tying it up on the waist makes it a layered cover on the bottom. I would have loved to do this style on a regular basis. The leggings to open the show was too cool to notice.

I don't know his name, quite new to these Japanese models. I found his IG account though, @johnlife0125. His eyes, this physique, not too bulky and really looks nice. Pretty good stuff in Tokyo eh? I like the jackets they made for this collection, a simple black shirt, not too dressed up, and a cap all looks good on em! Notice also a pop of color there? It's pretty good on a white shirt, good for fair to dark skinned men like me.

I found something I love, this muscle shirt is perfect for me. See the cut on the sleeve? That's exactly what I'm looking for in a shirt. HUMAN can you get this for me? Haha!

Of course buddy Miguel Lasala walked on the stage for HUMAN. He's always here, rightfully so because he's an all Filipino guy. Like an all American guy but not in America. LOL. I like the jacket on the lady too, it's like Missy Elliot-ish. Though one thing I didn't like is the moment where the ladies wear flat shoes, there oughtta be a law against that in Philippine Fashion Week. It doesn't do justice to the short ladies nor does it accentuate their assets.

The shirts above especially the one for football is reminiscent of the brands I see designed in Japan or those carried by competitor SSI. The thing is, since this is going to be sold in HUMAN stores, it'll be like half or even quarter the price in let's say.. brands like Superdry. Quality won't be an issue because I've had like several human shirts worn over the years. They don't fade or stretch out of shape if you take care of them. Now I can't wait to see these things on the shelves of the Human shop in Glorietta. Oh and wait, who doesn't love Jodily Pendre?! She looks awesome in those check pants and see-through black blouse as her top.

You know what I like about these clothes? They're current, it expresses the attitude of the designer and the people now, not yesterday, now. It's interesting and distinct. That's on the standard of HUMAN as more inclined and gearing on a lifestyle brand, even if they are on street wear. They have evolved this good and with the right kind of swag, it doesn't look dirty. I find it classy even.

I also really like the fact that they are keeping it simple. It's not too complicated to be misunderstood by ordinary people. Non fashionistas can just go to the store, pick the primary pieces and match their existing clothing. HUMAN also has some really mean accessories which you should check out, I've been buying those since I was in college. Let's not divulge the year shall we? Anyway, they are beginning to take shape and later on introduce pops of colors on shirts, shorts, socks and shoes. Much like pop art where Warhol reigns. It's where he was inspired to begin with.

The tons of colors had me thinking if I was in the same show but yes, they gambled to veer off monochrome. In our books, it looked pretty good especially on the galactic pieces and collared shirts. It's still street but a bit preppy, something college guys and gals would dig. If you want something so bad, you got to do this on Philippine Fashion Week and just watch it pay off.

These last few pieces were really good. I wanted to wear shorts for a change, even if I haven't worn one outside the streets for YEARS! Aside from that, I love the penguin tux like number that the curly Japanese guy is wearing. You can even get away with it in formal occasions here in Manila. It is MTV Awards worthy. I can see we have a bright future ahead of us, and it's all in the  HUMAN x JMAN Collection.

If you need someone you can trust, take that conviction and interpret them into clothing that's got the passion and energy that lives up to its reputation. This is way more than just a fashion show, it's been a dedication to aesthetic greatness. They did this to show greatness, and that they did.

Congratulations Johann Manas, I am extremely happy you did this with HUMAN, one of Suyen's best brands. Congratulations also Sir Ben Chan and everybody who made this show possible. I love what I'm seeing and hope we get to cover more of these shows, all worthy for my lens! See you next season!