Plan International Philippines and their fight to end Teenage Pregnancy

Alarming. The Philippines is actually leading in teenage pregnancy rates according to a recent survey. Plan International says every hour 576 more babies are born in the Philippines. There is a big correlation between poverty, but the major cause of it is lack of education. Ms. Carin van de Hor of Plan International says even though they are working with local government, and national agencies, it's still not enough and they have to start with something. The National Youth Commission gave them really good numbers that have been put to good use in statistics, then used for other agencies. These teenagers have no access to information and it's time to take action. Aside from that, there should be health reasons why this shouldn't be the case. A 14 year old for example should not undergo birthing yet because their bodies are not ready the child will have growth stunting - and not have life to its full potential. This cycle will keep repeating and if we don't work on the education and awareness of these teens, of which they are part of the demographic. It's a very sad statistic they exclaimed. They work in health, disaster risk reduction and the rest, but they know they had to have a more holistic approach. This is how it's supposed to be addressed.

Marco Savio, Plan International's Deputy Country Director for Programs says "We have education projects and we target areas that are also run by the government and address the reasons why they don't go to school and such. We tailor support to the children and we are doing 15,000 now (just on this project). We are using systems that are already approved by local government. We are helping them to support the children in their areas. There are a lot of problems, in the Philippines, parents know the importance of education and we are working on this. We have never had parents tell us they never want their children to school, like building bridges, pay for transportation, this is where other foundations come in. Right now, we have Dubai Cares here celebrating with us with their CEO. They've funded projects like these and provide for more children in places like Samar, Leyte and others. We measure success by the number of schools completed, the rate and number of graduates, how many of them move on and have highschool or college degrees and other KPI's. "

"We also check their health status, the number of pregnancies, no malnutrition, and the rest. There are different reasons in rural areas, distance and stuff. In the urban areas, the slums, the lack of work, there are a lot of things too. We are working in Mindoro, like with Mangyans, we give them knowledge and give them the ability to have choice. We work with different private organizations and help the government with their own programs. We do that in certain levels. We also work very closely with UN and their other divisions. They don't just fund, they share resources and we put our strengths together. We have stayed here for 53 years and we have a lot of areas that already have seen results. We help them do peer education as well so they can do it on their own. We do a lot of creative work so children go back to school. We support the structure of the community so everyone would be able to benefit. We do this in any given time and move in different areas in the country. We have offices everywhere and we hope to be able to bring these communities to be self sufficient and have all their issues resolved in 10 years or less." adds Ms. Carin van de Hor.

They also held a mini concert in Alabang Town Center that afternoon to bring awareness for the cause.

I hope they get to help more people. Teenage pregnancy is indeed a big issue and we should start to learn how to tell the young ones how to have a healthier lifestyle, a successful life and a great mind to know when they should have their own offspring. Not when they are kids themselves. Thanks to Kairos Solutions and AnakTV also for helping them to reach that goal. 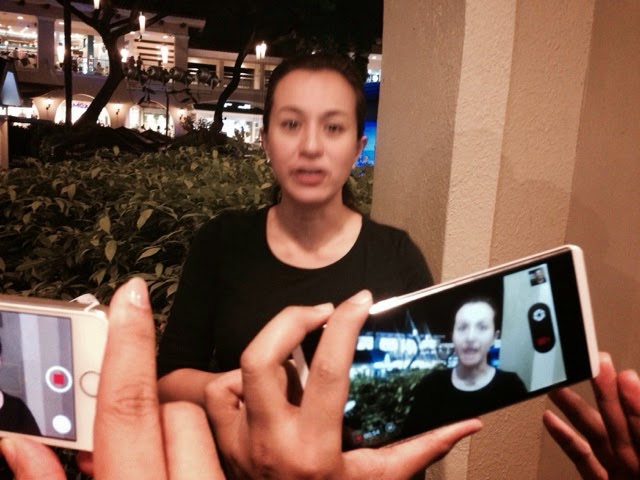 We also had Ms. Mikee Cojuanco Jaworski and the Ms. Earth Philippines candidates helping to raise awareness for the cause. They also had a short bike event in Marikina earlier that day. Mikee believes that aside from the parents, children should have a community of people who they can look up to, to have the knowledge and wisdom that could empower them to be better people. Education should start from the home and she adds that it should be to a point where girls would be able to decypher for themselves a sound decision, a right decision, one that they formulated themselves. In giving them education, she believes that we will get to have them achieve more. On the teenage pregnancy situation in the Philippines, she feel sad because teenagers are not ready because they haven't lived a full life themselves yet. Children should not suffer hunger later on and suffer consequences which their parents have decided on. The responsibility of bringing up a child is big, you can't learn that as a girl if you're still too young and haven't even played yourself and see the world as it is. That is just selfish. They don't know that yet.
She made a really good point. I hope together, these foundations and Plan International would be able to succeed in their goal of bringing the teenage pregnancy rates down in our country. I hope it's not just a dream.