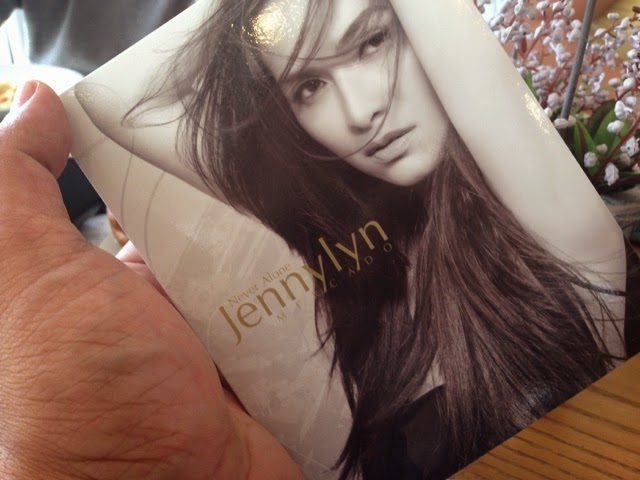 If you haven't heard it yet, Jennylyn Mercado is coming out with the album called "Never Alone - Jennylyn Mercado". The single "Basta't Nandito Ka" has already topped the iTunes charts upon it's digital release last October 4, 2014 and this album will also be released by this week which would get all her fans and supporters crazy.

"I'm really excited to see this especially "Kaya Ko Na" by Vehnee Saturno and the other originals. I went to other labels to experiment but now that I'm back with GMA Records it's easy and I got to work with with good people like Janno Gibbs and Dennis Trillo." says Jennylyn. She also adds "I have forgiven a lot of people and it's time to move on (hence the line up of the songs). The songs in the album might have sound hopeful but it's not intentional. It was just the things I felt that time because this was made a long time ago (perhaps February this year). My concert in London was great and you can really feel they hungered for music that they haven't heard of for such a long time. My album will be released in Sunday All Stars this week and I'll sing around 5 of them on that day, unfortunately Dennis won't be here that time. I'll be getting these  others in music video but some of them are already out like "Basta't Nandito Ka" with Alden Richards as my leading man."

Jennylyn thanks GMA Records for making her transition to the recording label very smooth and she's excited to have another album from them soon. She's got 11 tracks on this album and wants to perhaps have more originals in the next one. "Abot Langit", "Basta't Nandito Ka", "Kaya Ko Na", "Never Alone", "We don't belong", "Sana", "Rhodora X Theme (Sa Hatinggabi)", "Till My Heartaches End", "Hatinggabi", "Never Gonna Let You Go" which she sang with Janno Gibbs, and "After All" which she did with Dennis Trillo. It's now available in major record bars, music stores, iTunes, Spinnr and other stores online.

I heard the tracks just now and she also sang a few lines live, she's still got it of course! Listen to the Vehnee Saturno composition "Basta't Nandito Ka". Can't wait to see some of these be used in dramas on GMA as well. Wish you all the best Jen! Thank you for the short interview!