GAMEBOYS' Elijah Canlas: In the shoes of Cai Lazaro 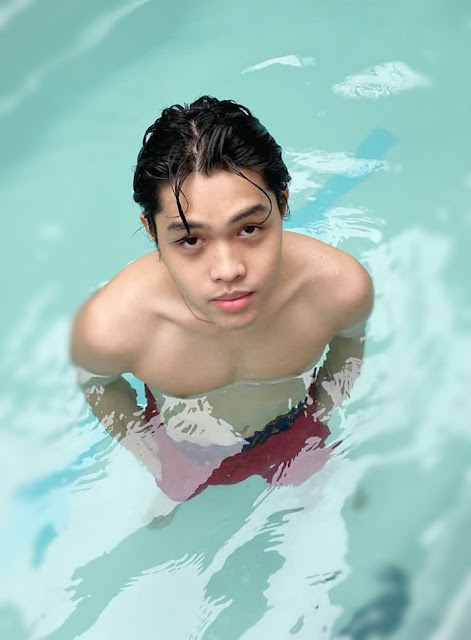 Elijah taking a dip.
(Photo credits: Photo is from Elijah Canlas' IG post, not mine)

Kokoy De Santos and Elijah Canlas have done several films already and this digital Filipino BL (boys love) series have made everyone stick to their phones, tablets and PC's over several months, obsessed with the show called GAMEBOYS.

It's timely, current, and discusses tons of issues so people have been able to relate to it. Aside from that, their story continues to blossom, putting spins to run of the mill hetero kind of relationships and opens a whole world of possibilities on LOVE. It doesn't go without hitches of course because along the way, friends, exes, comebacks, always had to ruin things for them. Fret not, as they will keep you at the edge of your seats and give you more reasons to see if CaiReel (Cairo and Gavreel) will eventually end up together. We all want that to happen.

I have already asked Kokoy De Santos about the show and this time, we're asking Elijah Canlas about his embodiment of Cairo Lazaro. He is the gamer who fell in the hands of Gavreel played by Kokoy De Santos. Will he get charmed and tell the truth about his feelings? Or will he be holding back and suffer in the end?

I had the chance to interview you for your film Kalel,15, a very daring role. How did you get picked for Gameboys?

I don’t really know why Direk Jun and Perci picked me exactly but I’ve been blessed enough to be a part of The IdeaFirst family ever since late-2018. I’m also grateful for the trust the whole team has given me.

Have you worked with Kokoy before? How is he as a person?

Yup. I’ve worked with Kokoy before for Petersen Vargas’ Some Nights I Feel Like Walking. He’s definitely fun to be around with. He’s not far off from Gavreel’s personality also but I’d say he’s much more than that.

Who is Cairo for you?

Cairo is definitely one of the hardest roles I’ve had to portray. Me and Cairo have a love and hate relationship. But I’ve grown to love and appreciate him more now. I
always work hard and strive for a performance that justifies representation the best I can. There’s always immense pressure in portraying a character who is dear to the LGBTQIA+ community.

Who in Cai’s eyes is Gavreel? Who/what is he to you? Do you think Kokoy is doing a good job portraying Gav?

Gavreel is the most pleasant surprise in Cairo’s life. Though annoying and aggressive, Cairo appreciates the company and attention Gavreel gives him. He’s never felt a connection as deep as what he’s getting with Gav. He may deny it, but Gav brings light to his life. That sometimes scares him. There is no one else to play Gavreel other than Kokoy, no doubt. He delivers a performance that would instantly give you butterflies in your stomach with every line.

What do you think made Gav fall in love with Cai?

I think it’s Cairo’s mysteriousness. You never know what he’s thinking. I would say that Cairo has this innocence that makes him seem charming. And just like what Terrence said (during Ep5), Gav loves the challenge of courting a guy who’s hard to get.

Do you think Gav is sexy? Do you think Cai is sexy? In what way? (Rate for 1-10, indicate the sexiest part of your body)

Gav is.... sexy... I guess. Next question! Cai can be sexy sometimes. When he pushes his hair back, and gives you that intimidating look. (10/10 they’re my lips, people usually say they’re so kissable.)

Would you want your own Pearl? Why?

Definitely! We all need a supportive friend who genuinely cares for our well-being and the state of the country.

The show made so many people emotional in your latest episode, you guys are so effective in portraying your roles, where would you like to take Cai’s character? Would you want them to end up together (Are you also rooting for them?)? Why?

I would want Cai to be more decisive and mature. And eventually go to outer space (he kids).

Of course, I want Cai and Gav to end up together! Who doesn’t want a happy ending for these two!

Speaking as Cai, would you love someone like Gav?

Did this show change your perspective about love? Was it different prior to starting this show? What’s your message to the fans ofthe show?

This show hasn’t changed my perspective at all. I’ve always been a firm believer of people having the right to love in all ways. It’s sad how our brothers and sisters from
the LGBTQIA+ community continue to face stigma and discrimination to this day and still don’t have the rights they deserve. Everyone should have the right to love.

This is why I’m proud to be a part of this show because it helps in normalizing stories like these. Because there’s no difference between Gameboys and every conventional romantic story out there. They’re all stories about love.

Thank you to everyone who’s been watching and supporting Gameboys! You guys make everything worth it, and we really appreciate it. We have a long way to go! I have so much love for each and everyone of you and I hope we’re able to entertain you despite all the chaos that’s been happening in the world today. Always stay safe and stay sane! Hope to meet all of you soon!

They will be showing Episode 7 this Friday, 8pm at the official The IdeaFirst Company YouTube channel. Make sure to be there to witness what will happen between Gavreel and Cairo's story, he might just admit he loves Gav in front of his ex. Perhaps, you'll see a happy ending as Elijah always wanted too.

Again, I would like to thank MediaXchange and The IdeaFirst Company for accommodating my request to interview these guys. Thank you also to Kokoy and Elijah for being so nice, hats off to you for not only being so smart answering my questions, hope to see you soon!

PS Fans are going bonkers with Kokoy admitting a relationship with Elijah on CNN, but he said CHARENG. These guys are so funny!

Hope I'd be able to talk to Adrianna So aka Pearl and ask about her upcoming series. She just admitted doing a GL on Twitter, this is interesting!