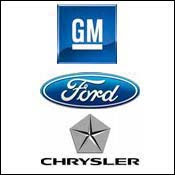 Car makers GM, Ford and Chrysler need help!
Car makers in the US have suffered the worst in this year's financial crisis. This has been the worst and a couple of brands have been urging the US Treasury to help car makers to weather out this bludgeoned business which has been the worst in 25 years. A lot of jobs will be lost and consumers will be faced to also suffer high prices as supply will be low. Democratic congressional leaders also have asked Treasury Secretary Henry Paulson to use the $700 billion rescue bill passed last November to provide temporary aid this industry. House Speaker Nancy Pelosi together with Senate Majority Leader Harry Reid wrote to Henry Paulson saying that the bill gave him a couple of options diverting funds from the present plan to have:

1. Broad discretion to purchase
2. Make commitments to purchase
3. Get the financial instruments that he'll determine necessary to restore financial-market stability in the US

The Lady House Speaker was among the legislators who met that month with the chief executives of car maker's General Motors, Ford and Chrysler. The three famous US car brand companies are seeking $50 billion in federal guaranteed loans to help them weather the worst car market in 25 years. These car makers are threatening the government that they may not have that much money to operate until the end of the year. If thousands lose their jobs and these manufacturers do not have production shares available for consumers, it surely will result to higher prices and a car loan may not be the best alternative. This may get ordinary Americans under huge debts and high interest rates even with an existing car loan. They wouldn't be able to cope up with this standard of living and this may put them below the poverty line. People will eventually file for personal bankruptcy.

There will be a new president come January and these manufacturers are waiting for the current Bush administration to act on policy options so a higher priority would be put into this industry. I bet you the transition team is talking about this as well. He already declared yesterday that the US will be facing hard times come early 2009 but will eventually recover once all the economic plans he proposed will be set into place. The world is awaiting the outcome of these plans and the initial agreed fund has already been used for several guarantees. General Motors reported a $4.2 billion third-quarter operating loss and said its available cash fell to $16.2 billion last September 30 from $21 billion at the end of June. Car sales plunged 18% in the last quarter and 32% last month in the US alone. If the plan is there, these companies and their executives only urged the government to rescue them first. I hope this would not translate to huge market losses also for their company in other parts of the world. China is now the biggest according to surveys, so if they lose that also it would mean a huge disaster for the economy. I hope he and his so called "change" starts now.

Please update your blogroll. I have a new blog, http://exdeoscientia.blogspot.com and I have added you to my blogroll already.