DINGDONG DANTES and BEAUTY GONZALEZ for I Can See You AlterNATE 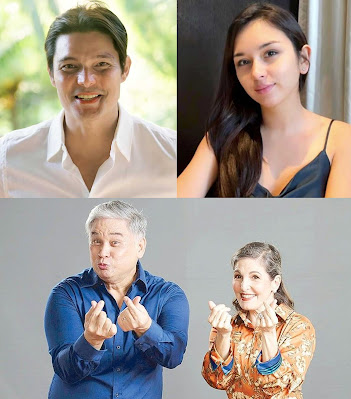 Exciting is pretty much a word that defines what we felt during the blog conference for the I Can See You AlterNATE series on GMA. This is the first time that Dingdong Dantes is going to be paired with Beauty Gonzales. They've had this taping done late last year and they worked pretty fast because everyone was very professional. This also includes the on screen comeback of Jackie Lou Blanco and Direk Ricky Davao, which for one or more reasons would have been not done on Philippine TV.

Beauty says "I was so lucky to get  to work with this cast because it was such a blast, I hope we get the chance to work again because this was a little bitin. It was such a beautiful experience! It's nice to end the year with me working with a group like this. Dingdong is so professional, very intuitive, I know why he's very respected in GMA because he's very caring and very nice to everyone. To tell you honestly I was nervous at first because I just wanted to work with him, and now it's happening."

Dingdong adds "This show is very unique, quite different from the shows I've done previously because I play two people, with different personalities. It's more of the difficult ones I've done in my career. It's a beautiful experience working with her. In the beginning we had to test the waters because it's the first time to meet on set, and first time to work with each other. The difficult roles made us more open with each other because the requirement was really high. As actors we had to know each other because we're giving part of ourselves in the roles we played. You need to have complete trust and I think we have done that in the beginning of the work day, we've established that."

I Can See You AlterNATE will be seen week nights on GMA Telebabad so make sure you catch the episodes starting day 1!