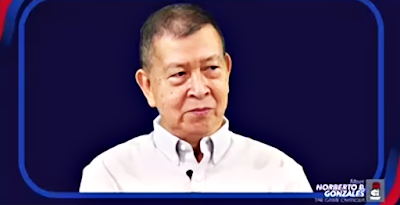 Meet Norberto B. Gonzales. He's a National Security Adviser and general director of the National Security Council - and former Secretary of National Defense. He's a presidential aspirant this 2022 elections under the Philippine Democratic Socialist Party (PDSP). He's also bringing in 20 years of experience in political/peace negotiations, very well a part of what has been done in three different presidential terms and always, have been trusted in these matters.
Mr. Gonzales says "Since PDSP's inception, the youth has been instrumental in change and reform. The organizations sprouted during that time including non religious ones, and we advocated then something that would challenge the dictatorship without resorting to violence and communism."

He adds "The pandemic has been a very serious problem, it has continuously been a part of our lives for a while. It's important to re-organize our medical community, an integral part of what we need to solve this, to have a common position and address this immediately. It's time to invigorate our pharmaceutical industry, so we can make and create our own when things like these happens. The pandemic has made our lives change, but also showed us that nature can renew itself."

"When I went around the country, I talked to people. When I was in the government, I knew we had the ingredients of a much better nation than what we are today. Our people are good, and we can fix our lives, especially the young ones who are already a part of local government units. When they become politicians, they lose their identity, the system breaks them... and I hope a new one would fix this. I've been working for a decade in the government and I see this would make a huge difference. It's sad to see someone who has been already proven in court is making a comeback, and trying to destroy the truth. I've experienced martial law, and I've suffered that time, we cannot allow those to change history, lives were lost during that time and it is unacceptable. The election is supposed to be a time to choose new directions, new system. The most important asset of a country is its people. The opportunities should be for all, capital should be for everyone. We should stop some politicians from giving away resources to only a few people in this country."

"You know, it's sad to see what's happening to us. When we had the People Power Revolution, I thought this has ended Marcos' reign and all that was stolen from us will be brought back to the Filipino people. This election is important, we need to explain and tell the truth, and tell them about the atrocities of the Marcoses. We need to tell them now, especially the activists that are still living. I promise to tell the youth about history, we should never let them spread lies. It's hard for me to tell the other candidates, so I will try my best to tell the people instead. I believe in my countrymen who can discern right from wrong, I will not put myself in contention with Marcos' campaign."

"My difference is what would make me win from others, I hope that I can be that better person that people can choose among the candidates."

With experience in the matters of the state, he is one qualified individual to run this country. Aside from that, he identifies the pandemic as something that is a huge threat in our national security and believes in the ideologies of social democracy. You now have options, make that vote count in May.