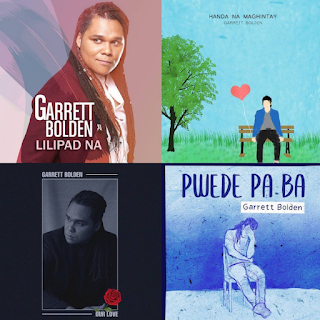 Saying it's a phenomenal year for singer, balladeer and Clash finalist Garrett Bolden is but an understatement. It's been a couple of years since we last saw him in a physical event (we talked to him last year virtually too) but certainly, his career has gotten into new heights with him doing several teleserye theme songs like the one for Agimat Ng Agila, The World Between Us, Stories for the Heart, I left My Heart In Sorsogon and more in the future. I asked him about him getting into a new title, being the new King of Teleserye songs perhaps, but he digressed and rather be called a balladeer. The humble lad just released his new single called "Pwede Pa Ba?" and it did debut at #3 and is included on the Fresh Friday picks in the Spotify charts, he's making a good impression with this new song.

Here's what we talked about earlier today.

Garrett is also planning to get an acting hat on if projects permit, it'll give him variety just like his compatriots from The Clash. He's really thankful for Sparkle GMA Artist Center as even if he didn't finish the contest as the champ, he's getting a lot of projects in the network when he thought it was going to be done after the show.

Now make sure you take the time to stream and download this new song on digital platforms because the talented lad deserves it. He's raring to go international soon, and we might be seeing that happening pretty close as he's slated to go to the US for interviews. Break a leg Garrett!