Anne Curtis for AURORA this MMFF

Here at the AURORA Press Conference with bubbly Anne Curtis and her director acclaimed Yam Laranas. 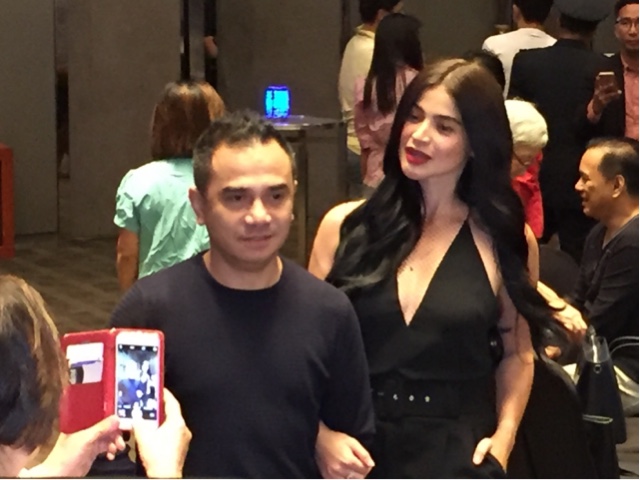 Anne Curtis shares “This is so different from the genres I have done in the past, this one is called elevated horror. We hope you get to feel that in the movie. I love horror films and when they were shooting this I was asking why I wasn’t screaming. It was something different, that feeling is what we are banking on. There are a lot of theories and even if there will be twists, we are excited people are thinking about it. This time though you can bring the whole family because it is story driven. I am not really a believer in ghosts but there was one time I saw something I couldn’t explain, a white face out of nowhere. I really like the movie called “The Others” and also JAWS, the shark film. It gave me nightmares actually, a lot on my list. I am a bit pressured, but it is about the film really, you should see how amazing this film is. I want people to watch it not just because of me, but the quality of it. If you follow my character, it is a story of survival and you will ask yourself if I need a leading man, or other cast members, but my character is a strong woman. It was the most amazing 15 days of my life. This was a different experience, Batanes is so beautiful, quiet and peaceful. I got to know the locals, we ate with them, there are amazing people. We were blessed with beautiful weather, they planned when to shoot this and it is a rule that we had to finish within 12 hours. So it was east than the usual. I got stung by a box jellyfish before in Batangas but I didn’t do much diving or deep scenes here. Just enough. Well I do not do films just because of awards, I think that is just the cherry on top. I love seeing Erwan’s reaction, he makes his films and he appreciates the color grading.”

Direk Yam says “This was inspired by several real events, like the Dona Paz tragedy, the other ones, we are inspired by it but we have a different story based from that. When you have the support of the producers, you can do everything even with a limited budget. We got a two story house made, mixed with computer graphics and you wouldn’t figure out which is which. We also have a great cast that supported the story. Actually any story can be adapted to any language, but this doesn’t have to be Hollywood, but it is created for Filipinos and we plan to just put subtitles. It is a combination of a lot of tragic events, we had that experience and I like documentary films and so many of those stick to you. That is where we did the story from, after we wrote this I fixed the horror parts and nobody else can do this aside from Anne. We started talking to Viva and we just got lucky. Of all the things I wished for the movie, aside from creative freedom is Anne to win an award here. That is my biggest wish. I didn’t deny this was a horror movie but it is a thriller and parents can take their kids, like a ferris wheel ride, a rollercoaster, almost the same as that. PG is a blessing to us.”

Now make sure you do not miss watching this film on the 25th! This is an entry to the MMFF by the combined efforts of Viva and Aliud Entertainment.