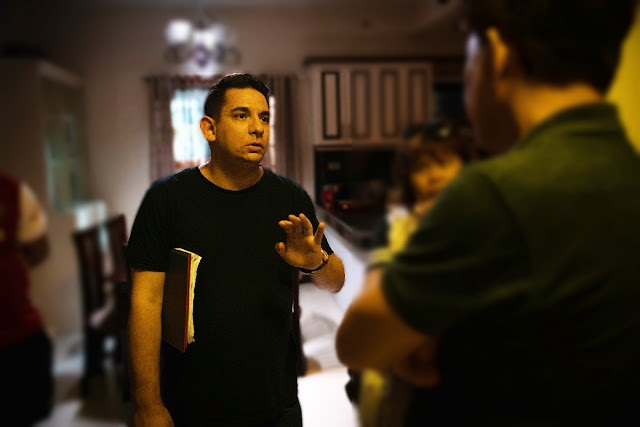 I've had the pleasure of meeting Writer-Director Phil Giordano during the screening of Brillante Mendoza's masterpiece "Palitan" during the first week of December 2021. He's originally from Staten Island in New York, got his masters from NYU Tisch School of the Arts Asia. He's pretty accomplished and has received a Grand Jury Prize at the New York Screenplay Contest for his short entitled "Supot".

He's no stranger to how we do films in the Philippines as I'm under the impression he's been working with Brillante Mendoza's production for a number of years. His handy work "Supot" that got around 10 accolades in Busan International Film Festival and several other award giving bodies - and have been shown in different countries as well. He's done several commercials and campaigns with well known brands like KFC, Porsche, Johnson & Johnson, Universal Music and others. Recently, they released a new movie which he made for the VIVAMAX platform called "PUSOY". This was something he already had written but made it extra spicy since it's likely to follow the theme of movies seen on the app.

As the title suggests, this is about a group of card hustlers lead by Baron Geisler's character Rodolfo. Their lives got complicated when they got caught in one of their cheating sprees and murdered a son of a politician played by Greg Hawkins (of Kuya Escort fame). Rodolfo got in a rut and had to seek help of a General which then forced him to go even deeper into debt... and the dark world of wagers, dirty money, women and vices.  The film stars Janelle Tee who plays the role of Xandra. She's Rodolfo’s mistress with the same set of skills, providing the venue for love, trust and betrayal in different acts. Also in PUSOY are Vince Rillon, Angeli Khang, Felix Roco, Jela Cuenca, Julio Diaz, Raqel Monteza, Kiko Matos and Jacq Yu. This is pretty much an ensemble of new and experienced actors which we asked Director Phil Giordano about, let's listen in:

It's remarkable to see that we have the talented Director Phil Giordano making strides in the movie industry in the Philippines. I like his capacity to adapt, to make his films follow his style, which I deem stem from his hunger to create things and write at an early age. After seeing films done in the US, he knew he could do an even better job and got inspired with the great film makers. He's also planning to have a shorter version of this out for international film festivals, so this is just the start. Exciting times no?!

PUSOY by the way can be seen worldwide on VIVAMAX (this is produced by Brillante Mendoza), you can visit VIVAmax.net for more information about the movie and other titles in their library. Get in tourch with Phil on his social channels FB: https://www.facebook.com/PhilipJGiordano/ IG: https://www.instagram.com/philip_giordano.director if you want to see more of his work.