5 Good Reasons to Watch "CALL ME PAPI" in Cinemas Today! 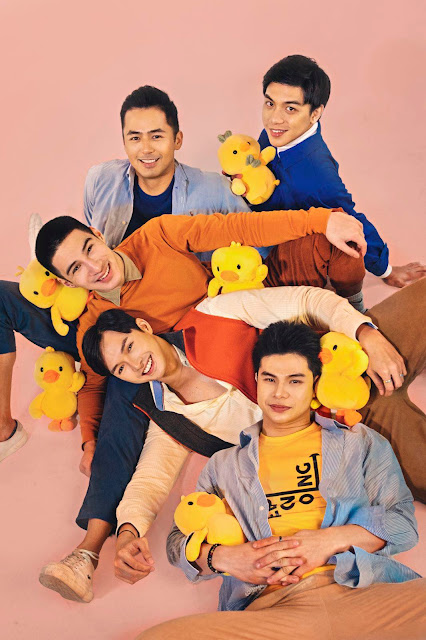 Spent an evening with the cast of CALL ME PAPI, it was their red carpet premiere and I think I under dressed, and I'm so sorry for that haha! I've been following this project for some time now, and was really excited to see how this would look like on the silver screen. This is also the last known project of Shandii Bacolod (Team MSB and FEAST Productions) who produced and conceptualized this film. She passed before the last day of filming, and they dedicated this to her. It's a light, funny film with 5 men involved. The roles are played by Enzo Pineda, Lharby Policarpio, Royce Cabrera, Aaron Concepcion and Albie Casiño. After watching the film, I could tell how you would probably like CALL ME PAPI which shows today on cinemas.

Three Years in the Making

It took a lot of time to make this film happen, it got delayed because they started a few days til the strict lockdown was imposed in the country. Stopping in the middle of filming made much of the artists act if it'll never be continued... but they did. It got stopped again when a surge happened. They followed strict protocols and was finally able to finish it July this year, which was a relief especially for those who would be handling continuity (of course their bodies and looks changed over time). The cast was ecstatic when they were done.

The Story is EASY

It was so nice to be there, the realization that both Dr. Alvin Yapan and Shandii Bacolod made this easy to digest in itself is already something different. They've made several films that are more on the serious side, very artsy, and would usually take time to understand, pretty cerebral. The feeling of being amongst usual friends, a huge barkada, that you would take a bullet for when times are hard.

Enzo Pineda, Lharby Policarpio, Royce Cabrera, Aaron Concepcion and Albie Casiño alone would make you watch this film. They are absolutely in their best shape, though not the reason it's R-16, it's probably going to be one of the reasons to see this film. See, those muscles do actually come with deep stories in each of the characters they play. You'll find yourself rooting for one or almost all of them when you understand where they are coming from. Much of the drama though rests on Albie Casino's character, but as the film's name implies, he wouldn't end up handling everything alone because no matter how much things cost, the guys chip in to make things better. It is testosterone filled, but it ain't toxic... that alone should be appreciated.

There are several scenes which you'll find funny, but it wouldn't need a scientist to figure out. A little close to home especially if you're fond of "Tindahan" scenes where everything happens over a few bottles of beer and pulutan. The raunchy scenes would come, yes, it's certainly one of the highlights but never because of what you think. Watch out for the femmes because they too are built differently.


If there's a thing you would pick up from the relationships they forged, the women they loved or the reasons they leave or stay, is that there is hope, and LOVE for one another. It wouldn't be said straight forward, but done with a nudge, a banana, and eggs.

Go head on to theaters today to watch CALL ME PAPI. I liked what I saw in cinemas, because it's time you take a break from the usual serious movies. You need to get entertained while learning something in the process. These boys had that figured out.