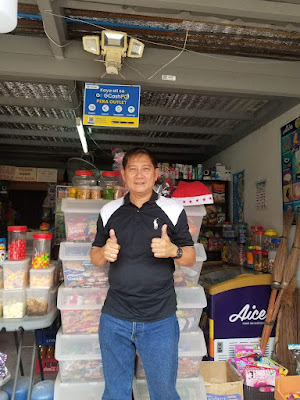 The pandemic was surely something that OFW's around the world found difficult. Not only were they restrained and confined in the comforts of their homes, but some also lost their jobs because businesses were not open. That means, a lot of OFW's weren't able to also provide for themselves or their families and returning to the Philippines was also the last resort.

Back home, one OFW who got stuck in the Philippines was Teodorico Ranili Jr. He was awfully scared for his family on where to find food or shelter, as he had no income or ask for alms from his relatives/family. He knew he had to make a way to earn a living, he sold bleach and home made peanut butter online just so they could eat and live decently. With the money he earned with the small business, he started buying more products for a Sari-Sari store that sells food and beverages in the community, and he wished it would become a mini mart some day. At Puregold (where he bought much of his wares), he saw how the Tindahan ni Aling Puring program has helped countless SME's reach their goals. With the perks of becoming a member, he was able to conveniently get the products he need to make his small business flourish even more during the most difficult days in the country. Now, Teodorico owns Ranili's One Stop Shop, a convenience store in Meycauayan Bulacan. He made lots of savings as those items that were on SALE at Puregold stores became more accessible, getting information about it ahead of time free of charge also helped so he could get proper supply every time.

He's just one of thousands of TNAP members who made their small business a successful one. If you want the same thing to happen to you, go ask how to become a member when you visit the Puregold branch near you.