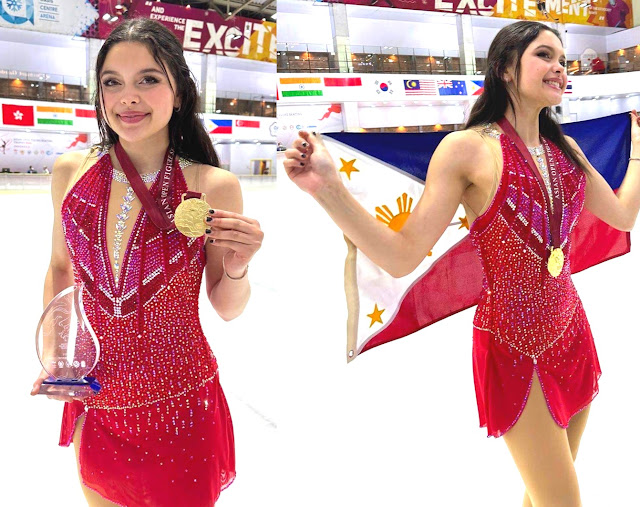 There's no stopping Filipino Figure Skating champ Sofia Frank as she recently won the 2022 Asian Open Figure Skating Competition. The event was held at the Oasis Center in Jakarta, Indonesia. She is as of date the highest ranked ISU femme athlete in the country and has been a Junior World Figure Skating competitor twice.

Her feat was also recognized via Senate Resolution 360 which marks her impressive performance at the annual competition. This was filed by Senator Bong Revilla cognizant of her outstanding win amongst 8 other world class athletes and scored 50.19 in the short program and 93.78 during the Free Skate. This resulted in 143.97 points to top the Senior Women Category. She could possibly be our next GOLD hopeful in future Winter Olympics.


She was also lauded by Senate Majority Leader Joel Villanueva and marked her performance at the Colorado Spring Invitationals, the famed US International Figure Skating Classic and several other shows in the US and EU.

Sofia also started training at the age of 3 under Natasha Adler De Guzman and Quida Robins. During her teens, she was under Olympic coach Tammy Gambill. She had been doing Junior-Senior level of competitions in the US Figure Skating and International Selection pool which has made her gain more experience in the sport. Currently, she is training for the upcoming 2024 Winter Olympics which will be held in Paris, France in hopes to represent the Philippines in Figure Skating. She's in the Philippines this month to do "Carols On Ice" which is a fundraising gala for the Philippine Skating Union (PHSU) who manages both Figure Skating and Speed Skating sports in the country. This is being done in cooperation with SM Skating and they're doing "Journey to a Dream" as their theme this year.

Sofia Frank will be performing with other Filipino skating athletes using music (mostly OPM) celebrating Christmas time in the Philippines. So make sure you be there for the event on December 21st, at the Mall of Asia Ice Skating Rink and remember, show starts 7PM!


Support the cause and our team in the dream of becoming Ice Skating champs this coming Olympics! Tickets are sold at https://ticket2me.net/e/36073 and it'll surely be a fun time with family if you watch it.