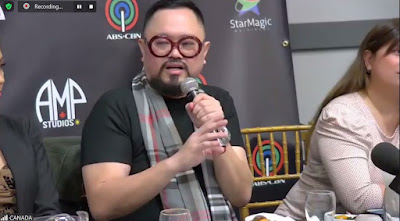 Star Magic Virtual Workshops has started during the pandemic and has been very successful. It has come to cross borders and now at AMP Studios in Toronto Canada. Direk Rahyan Carlos has been teaching the Chubbuck technique and has been certified to do so, but now they're doing it both virtually and face to face in the northern american country.

Right now, they're doing acting, voice and dance workshops and this year, they've managed to do one last August which will have a culminating activity this December 16th.

Direk Rahyan says "We are so excited to be here. We've been doing this for 2 years and now, we're doing this in the AMP Studios Canada to teach the technique here too. My students here have been family, thank you also to Liza and Ice Seguerra for being here with me. They are very close to my heart. The one we're giving in Canada is what we are giving our artists in Star Magic. What we do with our own actors will be the same, the same premier Chubbuck technique we are giving them, so our actors use pain as fuel for acting. I met them in 2019 and did it online instead of F2F, now we are opening it in Canada. We are also doing this in other countries, and the training involves how to express themselves, to help them become the person they want to be. It's just a bonus if they become artists in the Philippines. In the past 2 years, I have already trusted them about the process, I give my students pointers on ethics for actors. It follows on becoming a better actor, it is important that it starts from there. You are just as good as your last work. We always train wherever we are, talent will be chaos without discipline, and that's what started this all in AMP Studios Canada."

Liza Dino Seguerra says "I look forward to watch your acting showcase, this experience is probably life changing for you as much as it is for me. Thank you for supporting Star Magic to globalize, expanding our industry. We have so much talent in the country, if it weren't for Star Magic I wouldn't have learned the Ivana Chubbuck technique. I am so honored to be part of the showcase, thank you for inviting me here. Thank you so much for your hospitality, it doesn't even feel like work."

Ice Seguerra says "Like what Liza said, training is important. I wouldn't be a singer if I didn't do that, I will be part of your recital, I really can't wait to be on stage with you guys."

AMP Studios Canada and Star Magic Workshops can be joined via website (https://amp-ed.com/), Faceboook and IG account. Just fill up the form and do the orientation. It's the same as in the Philippines and do it by batch. It ends in a recital so it'll be a while if you get in. They are also doing it in EST, more convenient for those in North America or closer locations. The pre requisite is the heart and time to do it. You don't have to have experience in acting, it turns passionate people into actors with the Chubbuck technique. If you have all those, this is perfect for you.