JAKE CUENCA Acknowledges Buzz About Controversial Film "My Father, Myself" 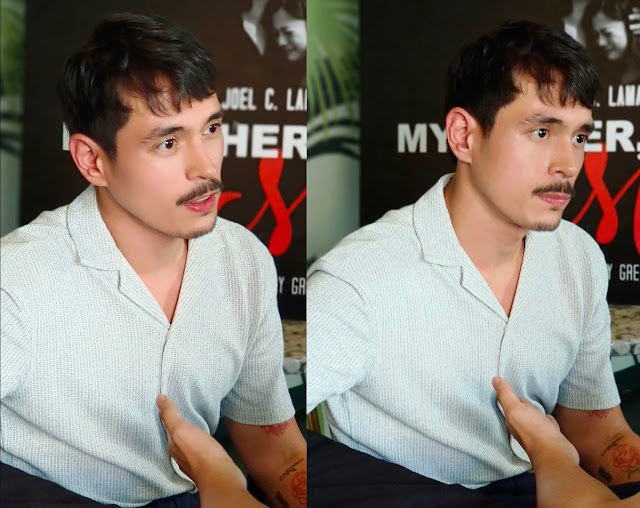 Netizens are still talking about the film "My Father, Myself" (by acclaimed Director Joel Lamangan) after its trailer was released a couple weeks back. In it, the heavily awarded and very talented actor Jake Cuenca was seen in intimate scenes with Sean De Guzman who's already done several indie and commercial films in his belt too.


Jake says "We do look at the comments and we see the negative ones, we do take note of that, but we also see a lot of positive ones on my Instagram account who on the other hand appreciates it. They know the story is different, but beautiful, and they've never seen things like this on cinema before."

Equally talented actress Dimples Roman plays Jake's wife Amanda and he commented "It's not enough to thank Dimples Romana for the amount of help she's given us during the filming of My Father, Myself. Rest assured, when she needs my help in any way, on another movie... I'll return the favor and help her there."

Jake also describes his family and said "I haven't been too visible when it comes to my personal life especially on social media. People really didn't really see what was happening, but we did really go through a lot of challenges in our relationship. The real reason why I'm doing this film is because my Mom told me that I could do it, so I'm really dedicating this to her. To tell you honestly, it's really my goal to win an award which has been my goal this year and next year. For sure, the first award that I get will be for my mother. I want that to happen!"

He adds "People can interpret me any way they want. The reason why I can work on films like these is because I don't have questions on myself, I don't have anything like that, I can focus on acting, and on the task at hand rather than ask myself about unrelated questions. We are just actors at the end of the day, I want to work with everyone... when that opportunity comes, I want to be partnered with Vice, or do dramas, let's do it, why not? Like what I said, I don't have limitations."

Talk about the film "My Father, Myself" certainly be to the brim til the actual movie comes out on the 25th as part of the Metro Manila Film Festival 2022. Talented writer and actress Quinn Carillo (who did mighty well on several movies) was responsible for this story. This actually happened in real life and she interpreted it extensively for screenplay. This is produced by 3:16 Media Network and Mentroque who hinted about this I think in past events. This is huge because of the amount of people that are about to see this on MMFF. With an R18 rating, this would be for the mature audiences only. It'll be interesting to see how they would react once they get to see the whole story.