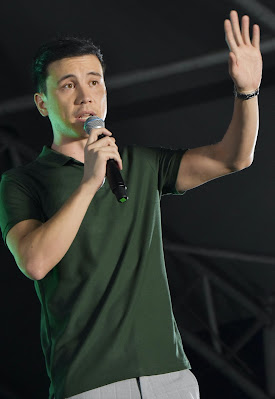 Things have been very busy in Congress this week as the Maharlika Investment fund takes centerstage on the plenary. They passed it hours ago with 279 saying YES and only 6 against it. It officially holds House Bill No. 6608 and Quezon City District 1 Congressman Arjo Atayde is moving to have additional safeguards in the bill particularly to make sure protection from corruption is in place.

Arjo says "I would support the movement to include safeguards in the Maharlika Investment Fund to make sure the fund really benefits the country. There are amendments already adopted by the lower house. This involves the non inclusion of GSIS and SSS which was announced earlier. We need to scrutinize the source of funds to protect it from irregularities and questionable investments for the fund. I assure that we will continue to safeguard the fund and put the Filipino citizen's interest first. There will be penal provisions meant to punish directors, trustees, officers of those managing the fund. On section 44, fines can be from 50,000 to 2 Million pesos and jail time of 1 to 5 years."

Hopefully this would augment the national budget, create more savings for government offices and increase economic development not just in cities, but the countryside. There are over 50 countries doing Sovereign Wealth funds like Singapore, HK, our neighbors Indonesia, Malaysia, Taiwan, Vietnam and new nation East Timor. Hopefully this would generate funds in the future to benefit more Filipinos and not fall in the hands of corrupt politicians.