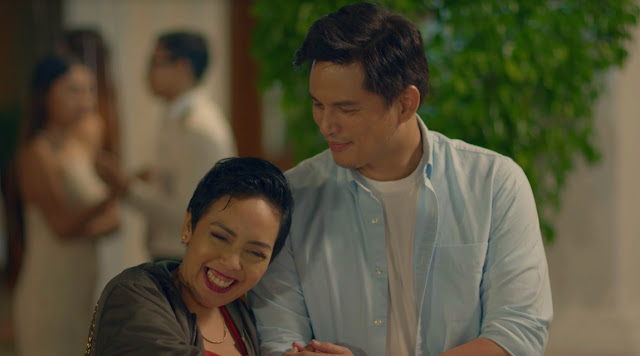 I have seen the films ECHORSIS (2016 award winning gay comedy horror themed film) and Mia (2020, environmental themed) which was produced by Chris Cahilig under Insight 360 Films. These were well made and talked about very pressing issues. This time, they released the next one (through a teaser), a very promising one at that called "Miss Q & A: Para sa magaganda lang ba ang love life?".


The film is directed by Lemuel Lorca who's got several awards on his belt, while the screenplay was done by John Bedia in collaboration with Lorca and Cahilig. It stars Dental Diva Kakai Bautista and the immortal, vampire like leading man Zoren Legaspi. Yes, it looks like an odd combination but producer Chris Cahilig puts this as a way to believe in love. Check out this teaser they released a couple days ago so you get to know what I'm talking about. This also features the song "Halika" which is written and sung by Seth Dunga. This is also available in digital stores and Spotify if you want to hear more of it.


This film might be a romcom, but it feels more dreamy and romantic. Though it really asked that question that nobody would often do. Though successful, Kakai's character is portrayed here as the one less fortunate in the looks department, but their interactions say otherwise as Zoren became the perfect gentleman, going through the experience of dating in a theme park and swooning the lady he's with. Zoren looks so good on screen, and the way Kakai takes in his efforts, felt so genuine Honestly, I'm pretty excited to see this on silver screen, but things are still a little dangerous out there that this might be shown soon on digital channels, so stay tuned for that. In the meantime, listen to the "Halika" which will be the official soundtrack for this film on Spotify. I'm sure you would mistake it as a foreign artist just like I did earlier. Pretty good in my books!