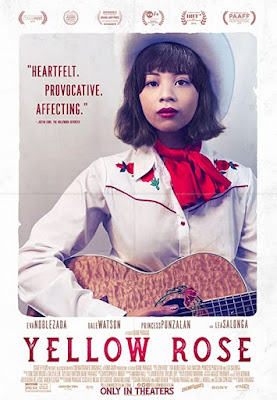 I've heard of a Hollywood film about a year ago which had 2 Miss Saigons on its cast. It was like a theatre lovers dream to see our very own Kims Ms. Lea Salonga and Eva Noblezada be a part of it, let alone the stellar cast which also includes Princess Punzalan and a throng of other stars from the US. People behind the camera are of Filipino American lineage too, and the proud race doesn't stop there. Well for those who wanted a piece of it are in a bit of a treat especially if you are in the Philippines because it will finally be shown on KTX.PH this coming January 29th.

Director Diane Paragas says "This is like coming home. I've been waiting for this day for a long time and I've been excited for Filipinos to see it there, this is a great moment, it feels like coming home. It's loosely based on my time growing up in Texas, I played music too but not as close as Eva, it was my outlet, I felt like a square peg in a round hole. This is a fable, in a form of a documentary so I did research a lot about families. Yellow Rose is a Texan Rose, an old song that people know. They use that term as a derogatory one, Yellow as in Asian. The original song was about a mulatto girl, it was about her being mixed race. It means a lot of things and you find that out in the film. Lea sings Dahil Sayo, also Princess, a way to pass the culture down. It was something that was sung to me by my Mom and Dad, it was passed on to me and now I sing it for my daughter. I was referred to her (Princess), her acting style was so natural. I have auditioned a lot of girls, I've heard about Eva as she was cast in Miss Saigon, when we got financing to shoot the film, I saw her on Broadway to see the script. She blew me away, she had a magnetic presence, she had sincerity especially about the seriousness in music. She was Rose, on the spot. Eva was selected by Backstage, as among the best of the best. It's what actors read, for a Filipino to be in stellar Holllywood names, that's unbelievable. Joe Biden vowed sweeping immigration reforms on Day 1, we've had 4 years of disdain and we have been abused a lot. It's also a story of an artist, like a star is born, about her resilience and how music saves her."

Ms. Princess Punzalan on the other hand has been sorely missed in the Philippines, but she's currently in the US and waiting out the pandemic although she's keen on doing more projects in the country soon. She says "There are a lot of people in the US and the international ones that have been able to see this. I see the struggles of Filipinos, who are undocumented, like sardines in one room. It's not an easy life. Here, I really feel the concern, the anxiety of what will happen to my daughter when I'm gone."

We also got to talk to Eva Noblezada and she shares "The role is like your identity as Filipinos suddenly being invisible, it's nice to make the rounds, go through the finish line with a movie that is made for you. This is really a cool thing. I know a handful people who are undocumented but are very passionate. I watched my Mom and Dad break their backs, and go to North Carolina where people ask you "Who are you? Why are you here?" when you are trying to make a home for yourself. Miss Saigon was about a Vietnamese which I was not, I was lucky in those roles."

She adds "We are chameleon in the arts, we talked about what that felt, I did that for 3 years. I was like... Seriously? you want me a young Filipina to play a young Filipina? It was about a young undocumented lass, she reached out to me, and honestly, it was one of the best decisions I've ever made in my entire life. She allows the actor to breathe, she had standards, she doesn't give you hurdles, you feel like you're the character. This allows the product authentic in a way. The fact that Yellow Rose highlighted an immigration story, it creates a divide that we hope as a film, would rip off that stereotypical, dangerous, anti patriotic divide in our country. These are people, these are human beings, extreme words that this past regime has used. Country music is like poetry, it's beautiful, to tell a story that is very young and have so much to do. That's what it is to me as a millenial. Getting to do this, it was all she had, hanging by a thread, to know that you are not alone and that you are protected."

I also asked her about racism and how she deals with it. I also asked the director about choosing "Dahil Sayo" which they interpreted in different ways and times in the film. Check out our interview with her this afternoon.

Now make sure you get your tickets via KTX.PH and see the film on the 29th. If you want to see the struggles of a young Asian girl who only wished for freedom, for love, and an overwhelming passion for country music, go see Yellow Rose.