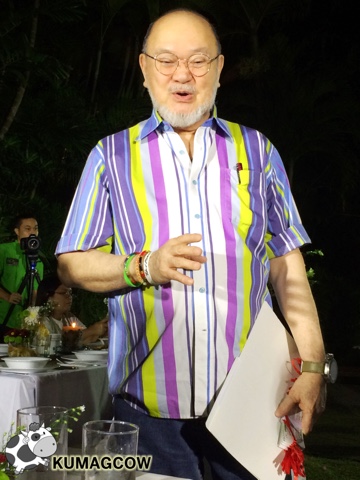 I have to admit, I've been a bit skeptical about this man and his reasons for running for the Presidency a couple of months ago. I didn't read about him that much so I didn't really know. I was far from being an uninformed voter and I do read a lot of news. He was also mentioned to me by a fellow UEnian in one of our chats so I was shocked once I saw his credentials. He was the former TESDA Secretary, a BSBA Graduate (with Latin honors) from UE and Masters in Business Administration from the Wharton School of the University of Pennsylvania in the US. He chaired tons of very successful corporations and even owned the franchise of 7UP, RC Cola, Jazz Cola which gave international softdrink manufacturers a run for their money in Visayas and Mindanao. He's done so much since and even amassed leadership and managerial experience in those years. He also has received numerous awards, of which he's so proud of as he feels he's really worked for it.

During our small interview in the lawmaker's home, he said "The administration has not answered question, things are on standstill and perhaps they've given no attention on matters like traffic, mrt, human hours lost so we're incurring economic losses because of that. No place to ride or go down, no systems, I don't know where to start telling you where the problems are. Tonight I want to share with you what can we do about it, how it can be done. I have 15 platforms that I woukd want to let the public know and I hope I could do this all at the same time.

I want to build the fastest internet backbone in 2017. In TESDA, we've done a lot of training for BPO services, we give aptitude tests and if they don't pass that we have skills training in 150 different courses all free so they can have a background in how to do things. We are losing 80% of our BPO services because we're slow and can't handle the services here. That's 45 Billion a year, meaning 1.3 Billion employees should have been hired for those internet based jobs if we had the infrastructure. We must equal the fastest in the world or even surpass it so we can maintain that lead over other countries. We are victims of stupidity and non caring of this government and they stand there and think we need 6 more years of this? There's an attempt to fool us, the same people, same banana. On day 7, I'd like to start that program, state of the art, have it be done by "build operate transfer" systems, include to have foreign ownership, remove taxes on oil, petroleum, equipment to do this just like Hong Kong.

Education is the great leveler, we have never given that chance to poor people and I'd like to level the playing field. We should all 15 million to have education, technical education, high school and elementary. We will have the best labor force and have the lowest cost of production in the world because we're charging no taxes. We're only going to do a flat rate of 8-12% in personal and business income taxes. This is what I would want to do.

When I was a congressman, I went to court and I've always heard the reason that they are raising the prices because they lack funds for investment and capital infusion. We need more players, so they don't monopolize the market. We need radical but rational decisions. I've never heard solutions from them. We should include nearby provinces and make a Super Metro Manila. We need a good transportation and communication secretary, a separate one. It's not enough to just have them in one department because these are pressing matters. I hope to do this and make it on day 1 running. We're looking for young and capable people for that.

I am by nature a giver, not a taker. There is no situation in my life that I have taken anything from the government. My left hand will be an iron fist whilst my right hand will be for pabebe wave. Public interest must be prioritized, but we must always be fair but just."


I changed my mind talking to the jolly Congressman. He's got a track record, has helped countless people to get scholarships of which some are also from his own pocket. He's definitely a man you can consider when voting for a president. He's got real education, corporate and public office experience to back it up. Aside from that, he's got the passion to see that technology could help us all in achieving economic success. He's done much of it in his own district and vows he could do it in his own programs if elected in office. Make sure you read up on your candidates and not just listen to advertisements which costs an arm and a leg on TV. You just wonder where they're getting the money for that no? Be educated and be mindful that you have choices, he is one of them.

For more information about him: