My sister works for Sykes and I don't, let's get that out there. I don't know much about the company but I've heard good things about them. Especially the guys from my old company who transferred there for greener pasture and professional growth. They've been working hard, and every year Sykes makes it a point that Sykesers (as they call em) get a little bit of reward. A little in the tune of Php 2 Million worth of prizes. 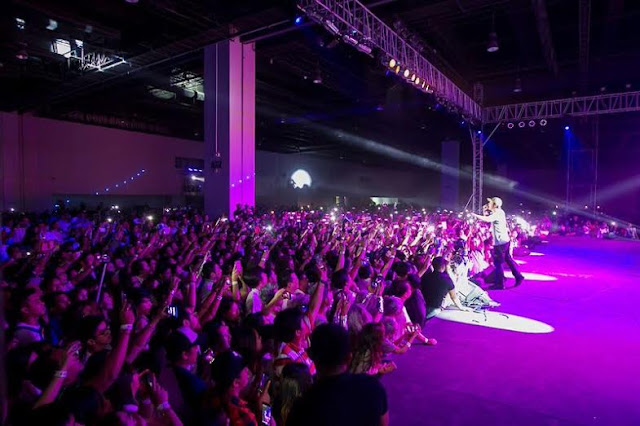 This happened last December and they dubbed it “SYKES FUTURE FORWARD: The SYKES 2015 Year-End Celebration”. Since they were on the futuristic side of things, they got all 5,000 Manila based employees to play dress up at the SMX Convention Center in Pasay City. They also raffled off prizes like a 32 inch Samsung LED TV, Ipad Mini 3, Mac Book Air, FujiFilm Instax Mini 8, an iPhone 6, Go Pro, and the latest Samsung smartphones. Since that is small (oh yes I kid), they took the liberty of having their main man VP and Country Manager Dean Van Ormer to give away the grand prize of Php 150,000 plus 2 more Php100,000 winners just because they liked it. That's one of the things they did to make them happy since they've worked so hard this 2015.

They also had fun with employees strutting out their stuff, holding a competition to see who the best company based dance group is. The winner declared was "True Sight of the Kaleidoscope". They also didn't forget to award Rich Dingding (Male Category) and Gemma de Lima (Female Category) for the garb they wore as they declared the most "Fashion Forward".

The work life balance they want each Sykes employee to have looks but a reality. They also rewarded “SYKESClista”, an employee based organization as “SYKES Choices Club” awardee for 2015. They have a lot and not many BPO offices have that. I'm sure some of you can tell, and it is essential to make the employees happy. If that ain't enough, they threw in Parokya Ni Edgar and had the greatest concert of their lives in the venue. That's just fun! Now I want to be with Sykes. Can they take me in? LOL!

Congratulations Sykes and your 13,000 employees, you did good!

https://careersph.sykes.com/
Posted by John Bueno at 5:13 AM