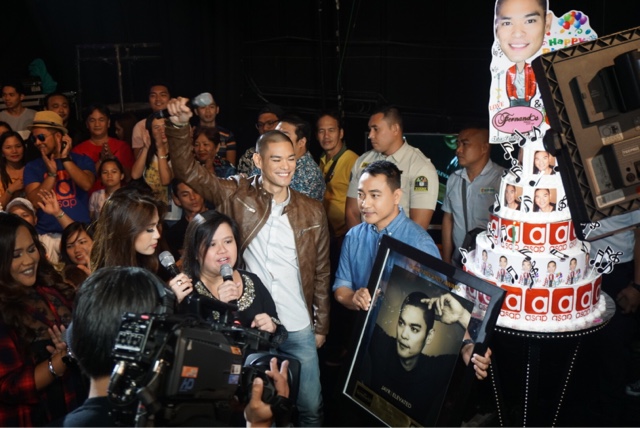 The last time I saw JayR was at the 2nd WISH Music Awards at the Araneta Coliseum. He was awesome on stage together with other RnB artists and has continually proved that since we've seen him on different prime afternoon shows. That again is going to be cemented as his recent album called ELEVATED turned GOLD status just a few days ago. He was given the award during ABSCBN's ASAP last January 22. With sales reaching 7,500 units in both physical and digital album sales, PARI and the Optical Media Board confers this award to the nation's RnP Prince. He accepted the award togethe with Homeworkz Ad Prom Officer Perry McDonald.

JayR finds this as a humongous acheivement and says "I truly feel great about receiving this gold record award under my own label. All the hard work, blood, sweat and tears that I put into it finally paid off. It was all passion which kept my drive high. I am strongly advocating for spreading original music. This just proves that originality and creativity is more important than statistics and numbers. Being an indie music label, we don't have a huge budget like other big labels. You have to do the legwork as far as distribution, promotion, recording, mixing, mastering, photoshoots (for covers), music video shoots, paperwork, permits and a lot more. I want fellow artists to realize that original music does sell. We don’t have to do remakes or covers in order to sell music. It’s proven here at HOMEWORKZ. People are looking for new creations. Classic songs will always be classic. But new songs are the future of OPM and I fervently hope they do more."

He quips "I would love for ELEVATED to hit platinum status too! I'll be promoting this at the same time as my new album this year. I hope to reach the next level, fingers crossed. I handpicked  my team at Homeworkz and we are a solid group. This is a team effort and I truly couldn’t have done it without them. I would also like to take this opportunity to thank all the music fans out there for keeping the OPM industry alive. We intend to make more music for your ears, hearts and souls. Thank you for allowing us artists to have the best job in the world."

If you don't know, I've heard JayR has helped a lot of artists in the industry. His music and his hunger for music has taken him to a lot of places. I fervently hope he continues to be blessed and continue to be an instrument to the industry so he could help more people... in the place he loves, the Philippines.