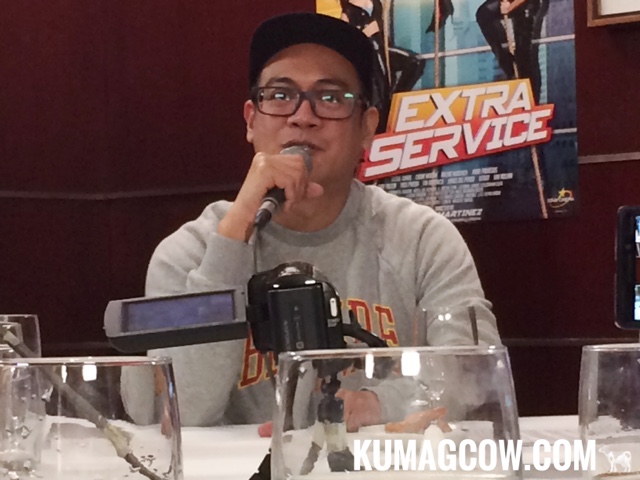 No, it's not what you think you naughty little boy. It's affinity to that and what is served is something funny. I've seen the trailer and got to see Coleen do waxing services with Vin Abrenica, Arci does foot massage with a foot looking man, and Jessy play around with Enzo Pineda. Now they're not just masseurs all day because they're a real deal crime fighting squad and agent spies set to seek the lost "Perlas Ng Silangan". They've got to find the secret treasure that belongs to the Philippine government via the original femme funny fatale Ms. Carmi Martin.

Direk Chris Quirps "This movie is in some way a work around beautiful faces. They trained under Erwin Tagle who's a champimm fighter. They were all willing to undergo rigorous trainings, they did mixed martial arts and were done seriously. But if they need to make it funny, they also use massage moves. The formula? There's none, but you always do what you can creatively. This is up my alley and I can do this without doing anything nasty. This is spas by day and spies by night and I've done really funny things so make sure you stay at the last part of the movie because there will be something there for you. I always have flare, something sexy, something explosive and more. The ladies have no hangups, when Star Cinema called me there are already stars and I've worked with some of them years ago. They're going to be funny physically so it's very new to them and the audience. Add to that really physically fit boys like Enzo, Vin and EJ and you know you're having a great time. They were afraid at first but all I asked of them is to just have fun. When they made this, they were developing characters and they envibed them right away. Even if Arci was tired, she got it already, no qualms at all. You'll love them for sure. They (the men) were excited and knew they had to show everything that they can do, they're going to channel different characters and you have to watch how they get involved with the ladies. EJ may not be in the trailer but he's got a surprise in this film as an ex who wants to get back with her (Arci). They have different relationship angles, but all in the spirit of fun without being overboard on sexy comedy."

The movie is under Star Cinema and Skylight Films and will show on January 11. This is the first offering of the production so you better watch this if you love the ladies!