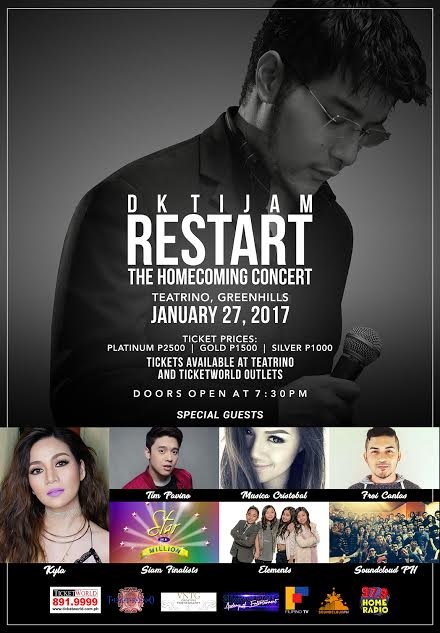 His soulful and raspy voice has earned him a spot in the coveted Grand Finals of Star In A Million together with the likes of current stars Erik Santos, Christian Bautista, Sheryn Regis and others. He may have not won in his time but his good looks and R&B vibe was enough to record and release albums in 2003. He left for Canada in 2006 leaving everything behind and worked as a Barista and Vocal Coach for a couple of years, but managed to still stayed in touch with his fans here in the Philippines through SoundCloud covers and social media sites. He figured he needed to go back and mark his homecoming with a concert called RESTART, an apt thing to do to describe what he feels.

The concert will happen at the TEATRINO in Greenhills, San Juan City. RESTART is his first major concert and together, he wanted people to reminisce how he also did well during the Star In A Million days. He won't be alone this time because his friends will make sure you're  going to enjoy an evening of music as Tim Pavino, Froilan Canlas (of Tawag ng Tanghalan fame), Erik Santos and his fellow Star In A Million Season 1 finalists will all be there. The concert will also be graced by the R&B princess Kyla.

He will also have Soundcloud Philippines perform and Elements which of whom are DK’s voice students in Canada. The concert RESTART has been planned for 11 years and he hopes this would do good for both his singing career and the other talents who are also going to be in this show. This will happen on January 27, 2017. You may get your tickets at Ticketworld outlets via www.ticketworld.com.ph or call 8919999. Or you can just get it on the Teatrino box office, even on the day it self. DK would like to thank his sponsors VNTG Creative Photography, Star Circle Academy of Entertainment, Filipino TV and their official radio partner 97.9 Home Radio.


Good luck on the show DK!

For more information about his concert: