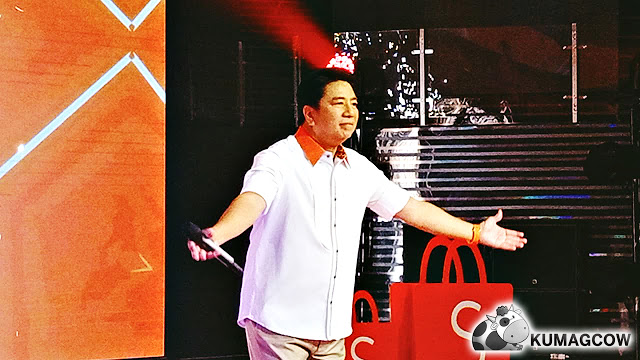 This was my first physical event with Shopee as they just announced their newest brand ambassador, no less than the man himself, Willie Revillame. The guy has been hosting popular show Wowowin and with the things he's done for the brand, it wasn't rocket science why they wouldn't choose him for this 3.3 Mega Shopping Day sale.

Kuya Wil as he is known to everyone connects to the masses well. When he does something, he puts his foot in it, even gives his arms and legs too. Needless to say, he's like Santa Claus that lasts the whole year and he's given much not just to the industry, but to countless Filipinos and the urban poor. When I asked him about why he's given so much, he told me that he doesn't want anything anymore, he's been so blessed so he's always looking forward to another day of giving back to people who has more or less put him where he is today. That's pretty noble, and honestly, I know of a lot of other things he's done for other people, like finding them jobs and stuff, so they too can put food on the table like any other person.

Here's my experience when I went to the GMA studios a few days ago. Enjoy!

Anyway, he's actually going to be a headliner during this week's 3.3 Shopee Milyonaryo TV Special. It will start on GMA 7’s Tutok to Win + Shopee Live this coming March 3. So make sure you're streaming through the Shopee app or GMA from 5:00 PM - 6:30 PM because that's where he'll be giving away tons of prizes courtesy of Shopee (Oh I heard, up to 5 Million pesos will be given away). Aside from that, Kapuso stars Juancho Trivino, Patricia Tumulak, Kelley Day, Ella Cruz, Julian Trono, bad boy of the dance floor Mark Herras and Rodjun Cruz will be there to entertain you.

Shopee will also give away three cash prizes worth Php 50,000 and Php 10,000 worth of ShopeePay credits. Aside from that, there will be rounds of Shopee Shake during the show wherein you can win cash prizes which amounts to Php 150,000, Php 250,000 and Php 500,000 smackaroos for top players. Of course, there will be well loved Shopee Milyonaryo Pera o Kahon if you claim tickets via the Shopee app. If you get called (announced on air), you just have to choose among six bags and win a prize from zero to 1 Million pesos!

If you haven't downloaded the app yet and enjoyed the vouchers and free shipping, you're missing out a lot. Oh and if you're a pro Shopee shopper, you know paying via Shopee Pay will get you more savings. Add to cart today and pay at 12am like me :)