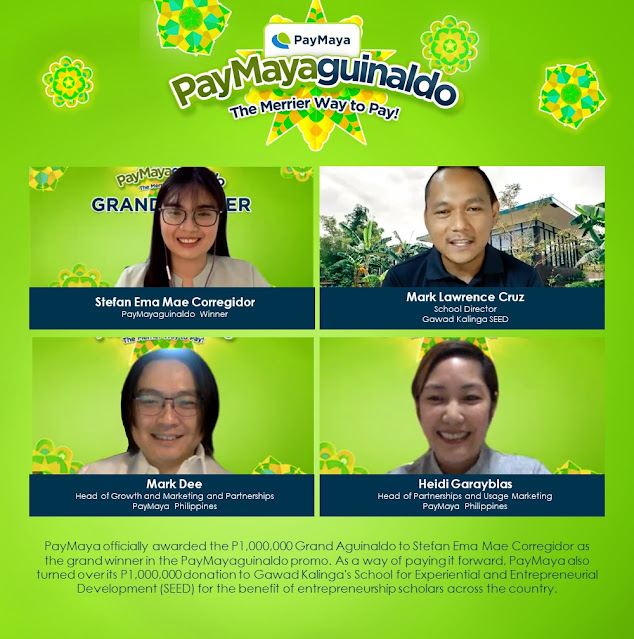 I've joined this personally and wondered who won the actual PayMayaguinaldo, well it looks like they've answered our questions. Recently they've just announced the recipient of 1 Million Pesos and the corresponding organization that would be receiving the same.

Her name is Stefan Ema Mae Corregidor, a 31yo employee from Quezon City. Her plan is to actually go back to Davao City where her mom is based and perhaps, build a home for her. Aside from that good news, an additional 1M will be given to Gawad Kalinga School for Experiential and Entrepreneurial Development Philippines (GK-SEED) who helps their students set up their own businesses and hopefully spur growth for it. This was really rewarding not just for her but for the countless students that would benefit from it, all because they chose cashless transactions via PayMaya.

PayMayaguinaldo was surely rewarding and imagine how she only used to pay through PayMaya QR and her registered phone number to pay with merchants and load in the in app shop. That benefited a lot of people, and have accomplished a dream for her own family. Through this, they also supported scholars who are in the industry of agri entrepreneurship. She thinks the transaction that won it was when she paid for government bills.


That's so touching no? Well if you haven't downloaded the app yet, go do it on the App Store or the Google Play store today. I've seen and felt the convenience, also benefited from the cashback promos recently. Aside from that, it won her a million bucks, so why shouldn't you try right? Who knows, there are tons of promos in the app soon!