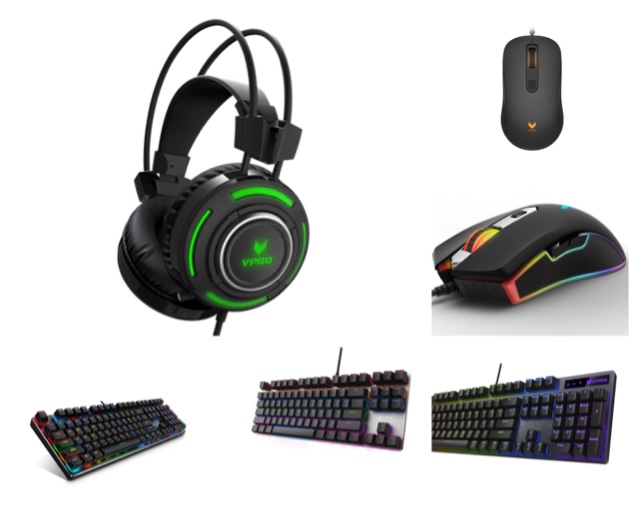 I had the chance to see Rapoo Philippines about two years ago (around April) and I was excited to finally find their well designed peripherals and devices. They're a smart company, banking on not just function but aesthetics which is pretty important to todays youth. Gamers ride on talent, but never forget function and style so at least they would get a mix of even if they lose a couple of matches, they would be complemented with the looks ha!

This holiday season, they've come out with an even better lineup last September, all affordable, well researched, well designed as they painstakingly took time to design it well as what YOU would find a good buy once it hit the shelves of your favorite tech stores.

For starters, theyw went out with 7 new models in 3 gaming devices, entry levels and more. These are must haves especially if your friend, relative or self want something good on your rigs.  The gaming mouse from VPRO called V16 only costs Php 695, where grip is relaxed, right or left hand usage wouldn't matter as it works for both. It would be comfortable,  even for long hours, very accurate and definitely exceed your expectations of accuracy. We all want that, especially in crucial e-sports level games which we all want to achieve someday (or probably did already).

Other than that, they also have breathing backlight on them which looks cool in the dark, so you will love them as long as you are on it. The V280 on the other hand costs Php 1,320, it's got 5 individually customizable buttons too where you can assign different functions. It would be a treat to actually have in fast times. Fancy? Yes but this one has a multitude of colors because of its LED system.

They also have awesome keyboards with the Rapoo VPRO line. They've got 4 designs for serious or  not so serious gamers, like the V500S ALLOY that costs Php 1,995, the V500Pro at Php 2,495, the V500RGB ALLOY at Php 3,195 and the V700RGB ALLOY that costs Php 3,395. All powerful because it's programmable, it will simplify combos, functions as it does macro keys that utilizes on board memory, no need of software to install, all there!  You will get ahead of the pack, outwit and outlast your opponents, nothing that a little practice and determination could do. Not just that, but a Gaming Headset as well with a noise cancelling mic called VH200 and costs Php 1,495.

It is very light and you can only expect comfort during hours of gaming, not much heat or sweating perhaps, if you happen to often feel that way with your current one now.

Maybe it's time you take a look at Rapoo?