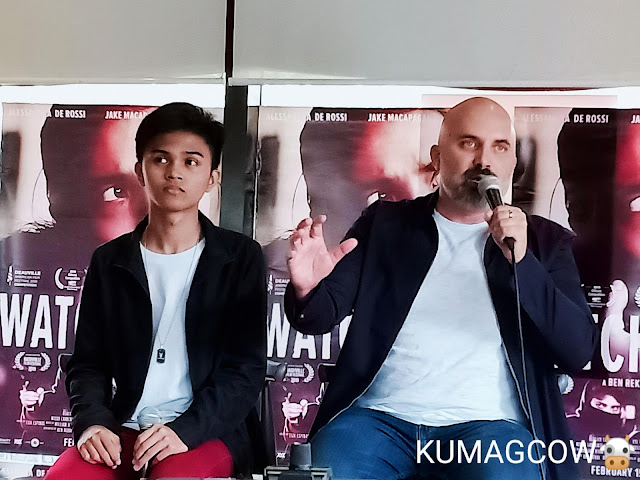 Alessandra de Rossi stars the movie WATCH LIST, a very powerful international film that has gained the nod of several international film festivals and won he hearts of cinema fans worldwide. It’s directed by Hollywood based American-Indian film maker Ben Rekhi which he also co-wrote with Rona Lean Sales. It’s a story about a woman recovering from drug use. Her husband got killed and stands now as breadwinner and protector of her kids which Rekhi dubs as “A very human story as it talks about how a mother would go the lengths to protect her children.” Together with Alessandra, she stars here with Jake Macapagal, Art Acuña, Lou Veloso, Jess Mendoza, Angeli Abayani, Micko Laurente and Timothy Mabalot.

It’s a little disturbing to see how it talks about matters close to home. The drug campaign by the government, politics, poverty, the who enchilada of things that are so taboo to talk about in the country. All of which may or may not be fiction.

Ben says “I’m excited to be here, to finally be able to see the release of it in the country. I spoke to Alessandra and she apologized she couldn’t come. I came across a photo of a woman who held her husband dead. I called the journalist and she told me stories she was covering and I couldn’t believe and understand it. I came to Manila and there were a lot of emotional things, I have never felt this before, I felt there was a higher presence that was compelling me to do this. I realized more and more to make this film. Yes there were challenges, but the community was welcoming to tell me about it. Wether the film was in English, Tagalog or Hindi, they were all good in English so it was east to communicate. The cast and crew were very supportive, sometimes the universe conspires this to happen and I have worked with talent in the US and I think Alex can win an Oscar one day. They are crazy talented. Early on I partnered with Reality Entertainment and Erik Matti suggested to me these actors including Art Acuna.  I have done films in India, shooting outside the US meant it just got a lot of talent elsewhere. Shooting in the neighborhoods itself like the violent places was an intense labor of love. Truth was the guiding principle, living in these circumstances made me a foreigner have to do tremendous amount of research. We shot this over 16 days and a lot of post production. A year at most. Originally I wanna pick someone older for a role, but I found the most talented people and it will break hearts to see talents like these (Micko). The Oscars and Parasite film makes it possible do hybrid style movies to open doors of conversations, everything is possible. I was here for 6 months and haven’t explored the country except Caloocan City’s 2nd Avenue. This is my fifth film, but I’m most proud of. Not knowing what people would want, but regardless hope this connects to an emotional level.”

Micko Laurente says “Finally, I am so excited to see the film in the Philippines. I just heard now that he watched my previous movie. It was very memorable for me (Bambanti) and I miss Alessandra a lot, when I learned there was an audition about it, I was happy just to see she was the Mom playing the role. Thank you for making me a part of it. In all the films I made, he’s one great guy. He picks the angles, the shots, he knows how to attack it before we do it on set. He’s not like a local director who screams at his actors. He’s very cool, even if he’s running out of sunlight, he was very calm about it. I have worked with Alessandra in two other films, when we did this she was funny, but when the work comes, she’s on cue to work with me and do it fast and efficient. I don’t usually do bad things so we get along quite well.”

This will show on theaters starting February 19, and is released by Reality Entertainment.