FASHION and MUSIC at the MACBETH MUSIC FESTIVAL 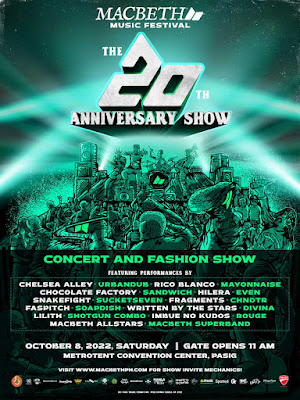 This is huge, and will be epic as popular clothing/footwear brand Macbeth celebrates their 20th Anniversary. Fans in the Philippines will be treated with a full MACBETH Music Festival that will involve a concert with some of the country's biggest bands and musicians, plus a fashion show of gargantuan proportions.

This will happen at the Metrotent Convention Center in Pasig City on October 8 at 11AM (when gates will open) but pretty much, you will be having fun there the whole day. Over 30 foreign and local models will be walking on the runway overlapped in 2 concert stages (confirmed by the event director) as different bands from different parts of the country will converge at the event. Artists such as Chelsea Alley, Rico Blanco, Divina, Lilith will perform in the concert including well known bands Mayonnaise, Urbandub, Chocolate Factory, Sandwich, Hilera, Even, Snakefight, Sucketseven, Fragments, Chndtr, Fastpitch, Soapdish, Written By The Stars, Shotgun Combo, Imbue No Kudos and Rouge. You will also get to see them work together via Macbeth All-Stars and Superband which I'm sure a lot of people would wonder how it could be executed.

For the Fashion part of the show, MACBETH will also be launching several brand lines that will be part of what they will have in the Philippine market. They're pretty much going to have Lady Macbeth and an underwear showcase for Macbeth Underwear; which will be a bit different from what we've been seeing from MACBETH these past few years. But rest assured, it'll be still sticking to their guns that it will be made by artists, for artists. and you in mind.


For those who don't know, MACBETH is a brand from Southern California founded by Tom DeLonge of Blink182. This represents him, his lifestyle and his music made for the like-minded ones. They make clothing, footwear and accessories. Can't wait for what's about to happen on October 8th, and I'm excited about the fashion show equally since I've been hungry for runway since the pandemic occurred.