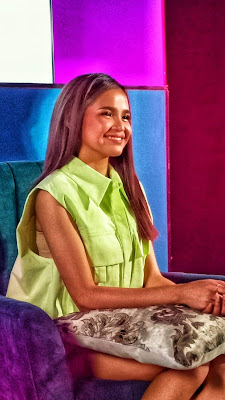 We touched base with ZEPHANIE a few days ago in a small press conference at the Cornerstone studios in Quezon City. The young Kapuso (and this generation's) Pop Princess has had really good breaks these past few months and we've seen remarkable achievements in just a short span of time.
For starters, she sang the Sparkle Summer Music theme which featured her fellow Sparkle stars. Aside from that, she also sang several teleserye songs like Tunay na Minamahal for Apoy Sa Langiy and Kaagapay for the show Bolera. She also had a Collab with up and coming PPOP Boyband VXON which will be used for "LUV IS: Caught In His Arms" which will premiere soon. She also spends weekends for ALL OUT SUNDAYS wherein she's a regular performer for the bit called QUEENDOM. Recently, she also graced the NCAA halftime show and hopes she also gets to do several dramas to showcase her acting skills in GMA.
As of now, her performance of LIGAYA on my TikTok account has had almost 100K views in just a few days. Here's her interview with the press which happened a few days ago.
If you want to support ZEPHANIE and her music, make sure you follow the social channels of SPARKLE and Cornerstone because they will be releasing music soon!