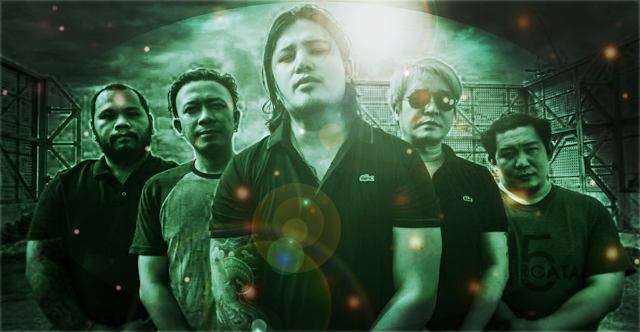 Took time out of my busy schedules for a night out on my neighborhood in Quezon City. Pretty dark out there, but I've seen something glow from afar, it was lights from a local bar where I saw FIREFLIES was playing.

It's a band formed in 2016, who now decided to get re-launched with new members in tow. If you're a little observant, you probably know most of them are from bands Cueshé who's had remarkable success in the early 2000's. Jay Justiniani does Lead Vocals, Jhunjie Dosdos on Vocals , Guitar and Keyboards, while JC Del Rosario IV does Vocals and Bass Guitar, RM Tolentino who does Percussions and Pat Galut does the Lead Guitar. They've been working hard the past few months taking a shot at writing songs, doing covers and performing in different locations across the Philippines.

Here's our short chat with them after a set, apologies as it's quite noisy in the bar we were in that evening.

Jay says "Actually, this group is easy to work with. Jhunjie is a former band member of Cueshé (like him) so we do really know each others dynamics. Our other band members are also good songwriters, so it was easy to work with even though we have different ideas. It was easier to make songs if you guys understand each other. Jhunjie and I are good friends, and good friends are hard to come by."

JC adds "Jhunjie and I started to work with Fireflies, and we now have new band members, we just didn't have a vocalist then, Jay agreed to join later on and that became a positive direction for the Fireflies band."

Jhunjie adds "I remember Jay was having doubts joining us a few years back. He was very busy and was based in Cebu. It was a bit difficult because we were playing in Manila most of the time. Some of the former Fireflies got a little tired working with us in the band because of the pandemic as income was really tight because we didn't have gigs during the lockdown. He had to go back to Davao. I was the only one left, I knew I had to do something. I'm thankful Jay agreed even if we haven't seen each other for a long time."


They named themselves Fireflies because it's like a spark in the dark. They're raring to perform in company parties, concerts local or foreign. They are currently being managed by Ms. Grace who previously worked in ABSCBN. You may get in touch with them through 09923150106 as it'll be surely busy during the holidays. They're bringing their new brand of music, some covers, and some old classics that 90's kids, Millenials and Gen Z's would absolutely love. They're going to release a few singles soon, so make sure you follow them also on their social channels at https://www.facebook.com/fireflies.ph because they're going to post updates of their gigs on that page.

Cheers to more music from FIREFLIES! Hope you shine brighter in the darkest hours and share your love of music even more!