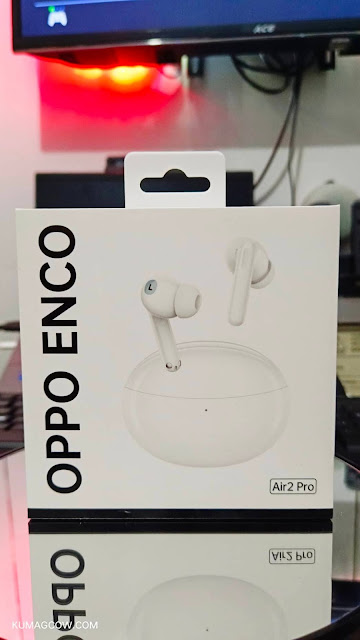 Having a dependable audio device these days is but a necessity especially when we're either at home or traveling to a destination. The call to work happens in the not so opportune times and we can't blame time management alone for that. Meetings, press conferences, I've been there, and as funny as it sounds, I usually have to get online to ask questions live on broadcast TV for that. Gone are the days of wired devices that doesn't do so much for the noise we get outside. Coffee shops, traffic, even barking dogs at home, we find ourselves in lots of disturbances when we're talking to people and can't do anything about it. That's where the OPPO Enco Air2 Pro True Wireless Noise Cancelling Earbuds come in to play.

This very portable (it fits in my pocket), nicely shaped audio device has been making my life easier even if I'm in the restaurant having a cup of coffee, while it's crowded inside. It takes the noise out of the equation, much that it wouldn't be heard that much in meetings and conferences like what I did this week. The clear vocals was evident and I could transcribe speeches quite easily. Aside from that, even if it's raining outside I didn't quite worry because it's IP54 standard Dust and Water Resistant. As a casual gamer, I've used it for online games on my phone and see quite low latency, so no worries about delays of when you're in a tough round. It easily pairs too when once you've already established connection with it the first time. The controls are also easy to do as it just takes a few taps to control music or turn the noise cancelling feature on and off. The battery is also quite good because it lasts 28 hours, so a normal work schedule can be covered. It's also smart as it detects when it's on ear or not and pauses music when you're playing something on it.
Here's a rundown on how we unboxed it this weekend:
If this rocks your boat, the OPPO Enco Air2 Pro is available in Shopee and other online stores. You can buy them HERE.