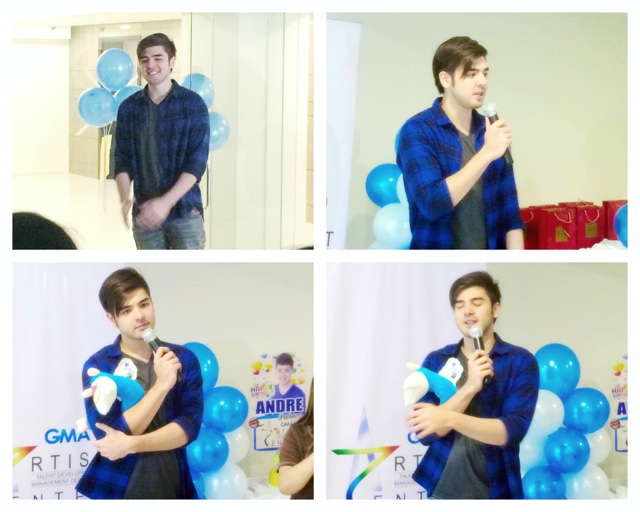 It was his birthday a few weeks ago but I've always asked, how do you actually surprise a smart guy like Andre Paras? It was hard, really hard. They told them they had a meeting, and got his schedules clear, he arrived on the dot and the press and bloggers were caught in traffic. Some of them passed by his car, he already thought something was going on, something smells fishy. We kept our hopes up that he would still be surprised and prepared for that moment. People went ahead and got ready expecting he was going to go up the stairs, but he went to the elevator instead LOL.


He's charming, I was a little worried about him being a little sad though that he didn't give that much times to the fans that were messaging him on Instagram and have seen them there during the event. He's trying as much as he can even if he's very busy and barely get sleep. He's enjoying his youth, he's still playing. He knows he's going to have to get serious roles in the coming years - but he's not in a hurry. He misses Kobe, his Dad too. He wants to enjoy what he's doing now and he's thankful he's got to celebrate his birthday with people from GMA Artist Center, media, the bloggers and his fans. He's never been this surprised though, and he's very thankful for that.

Here's the short interview with the good looking Andre Paras


He still appears in Half Sisters in more exciting episodes until next year. Stay tuned with the love problems he's going to bring to Ruru Madrid, Thea Tolentino and Barbie Forteza's characters in the series. After a one night stand with Ashley, a brewing war with him and Joaquin, will the lovers Diana and Bradley be back together again? Make sure you watch their show on GMA's Afternoon Prime! Plus perhaps a movie in the pipeline very soon!

http://gmanetwork.com/artistcenter
Posted by John Bueno at 1:10 AM