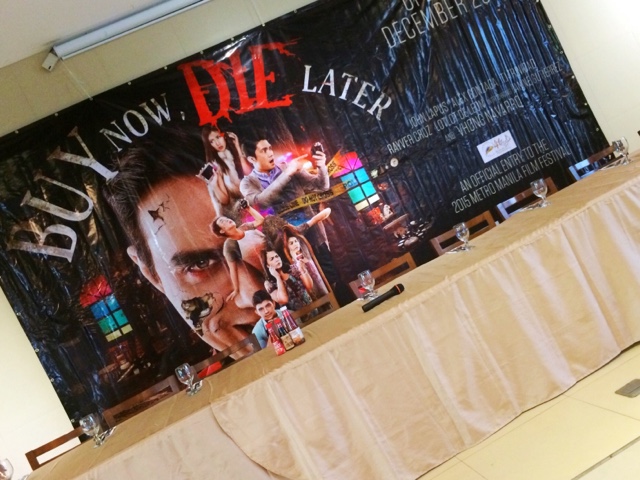 It looks like there's going to be real tough competition in this year's Metro Manila Film Festival as Quantum Films, MJM Productions, Tuko Film Productuons and Buchi Boy Films joined forces to put up a horror comedy film called "Buy Now, Die Later" which stars Vhong Navarro, John "Sweet" Lapus, Alex Gonzaga, Janine Gutierrez and Lotlot De Leon. They say this is a psychological thriller which will be related to the plot of having weaved around a human's 5 senses - sight, hearing, smell, touch and taste.

The premise is good, as it talks about the norms of society's greed, how to solve mysteries, the voices in our head, love and age. It's like a multitude of stories all put into one. Mind you, these are the same production outfits that also did "Walang Forever" and "English Only, Please".

Here's the video I made during the presscon


Vhong plays a blogger named Odie who wishes to become a serious photo journalist like his Dad. Tj Trinidad who plays Santi is an ecclectic shop keeper sells different wares to different individuals who in the end will face consequences brought about their traits and later become his victims. Odie bought a phone from his shop and gets scoops first hand from an app installed on it, later on solving each mystery as it unfolds. Ato, played by Rayver Cruz is a friend of Odie. He starts up a restaurant and buys a special ingredient for his restaurant, but them becomes greedy so they'll be having some real serious problems in the end. Chloe is played by Alex Gonzaga. She on the other hand wants to become a very successful singer. It came true when she used an app from Santi, but she gets crazy later on after having a great hit. John Lapus plays Pippa who used perfume (bought in Santi's store) and tries to woo Narciso (Manuel Chua) because he's madly in love with him. Lotlot De Leon on the other hand plays Maita who wished for her daughter (played by Janine) to have a normal life. Santi gets her in trouble but them Maita came into her senses and didn't accept the consequences, she's the only one who did that and got something better in return.

They promise five times the fun and entertainment on this official MMFF entry from these film outfits. It's directed by Randolf Longhas who also did "Ang Turkey ay Pabo Rin". Watch them on MMFF as they show it on December 25, for the Metro Manila Film Festival!