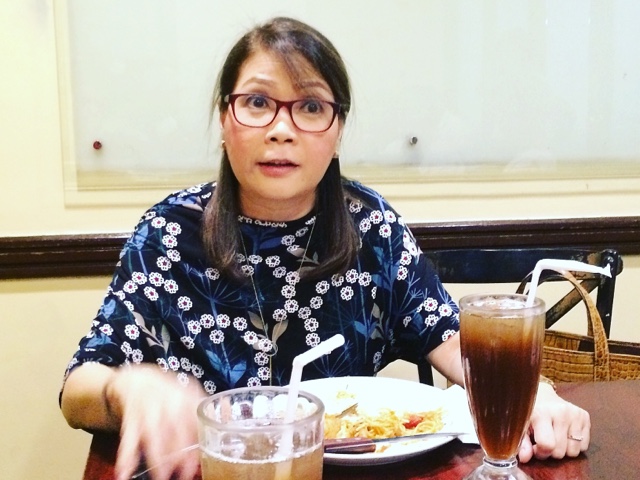 Had the chance to talk to Ms. Luchi Cruz Valdez head of TV5's News and Current Affairs. She's a seasoned anchor, donned several other stations before landing in the happiest network. They've done a good job hosting the 2nd Presidential debate, albeit some brouhaha over the delays that happened before the actual thing happened. We got to ask her questions about it plus how they plan to actually do "Bilang Pilipino" (which is a Filipino term that connotes counting/being Filipino). They felt this was the perfect word  to describe what they intend to do this election season and in hindsight, they've fared mighty well with the viewers and netizens. I've heard really good feedback as far as how they hosted it goes. They're even the best they say, and Ms. Luchi Cruz Valdez told us why.

"Our graphics are tailored for the television viewer with explanation by experts, our editors, reporters, correspondents that would easily understandable and relevant. Our data is based solely on data, how a province, a city did the last time. It's some kind of discussion that should be spurred by reliable sources, not by unverifiable ones like in social media. If we don't verify, most often than not we wouldn't show it on TV5.

My first election was the snap elections, but I covered more was when I was in GMA for the Ramos era. You always seek the truth, we mirror what people want yo ask. We also ask what we ourselves want to know, the rest is a follow up. You need to listen, be sharp, draw it from the candidate because that's where the story is. We asked targeted questions, so candidates listen to the other candidate, that's what made our debate successful. We observed that before. It's a hard job for the moderators, they had no choice when we had a meeting by their representatives. It's the format, we didn't ask questions that much and stayed to regulate because once that you do ask questions, you'll look like you're grilling the candidate. Targeted questions was the secret of our debate. We will have 5 sets of anchors, we get to talk more intimately and it was all hands on deck. The brainstorming was intense, it was really high. Our data will be the product of discussion of analysts, of campaign strategists and they'll know because they will feel it. We'll show factors why they won the last time and bring data to prove who will win next.

The precincts open at 5am and it will last 24 hours, if no cheating takes place. Most probably the next day, we'll already know the clear winner. It's because it's a real debate, we did a CNN and Fox thing but there are rules on time. We did that in  effect. It's not so much entertainment but we want people to finish it. In an election coverage it's not a concern, it's quickness of mind, being decisive and see who flares up or have a blank mind. It is important to think fast and you can measure that in a debate, law students go through that every year. In meetings, they asked to have 8 minutes so they can tell their platforms, but we didn't go through that because this is a debate.

In the end, VP Binay went on stage and he just put the documents on the foot of the podium so they could. I was surprised that I got good feedback after that apology. Every question must be planned, we changed it 4 times during brainstorming. We had to be transparent, we only had to ask half of the questions because of the delay. There were a lot of nice ones we didn't get to ask. We had arguments, we had our own debates with their representatives, we had go stand our ground because we didn't want it to be a sleeper. I think our debate was a lot like a benchmark, they had to be the ones to face criticisms and not fear a debate when they are running for office. I can't tell but debates helped a lot for people to form decisions and indecision. That is good all around."

Here's how it went during out intimate luncheon:

Part 1 talks about how they conducted TV5's debate. Listen in.


Part 2 details how some questions got asked, concentrating on HOW they would explain their platform.


Part 3 tells about how to actually choose leaders, choosing the right combination of people that will run this country:


Part 4. Wait for the last part where she details what happened in the debate during the delays.

This small chat was both enlightening and educational for most of us. She also details the cause on why we had to wait that long for the second Presidential debate. They researched well, prepared a lot but if in cases like these where mishaps occur, they were ready to apologize if they needed to.

Make sure you stick to TV5 and AKSYON TV if you want to see the Bilang Pilipino coverage. It's going to start on May 9, 2016 and it will be uninterrupted, until the President and Vice President is formally announced. This is going to be long! There's a lot more you should know, this is a continued process and if time permits you'll get those undecided voters something to base their judgements too. I appreciate the fact that she didn't hold back about telling us who caused the delays. At least now we know!