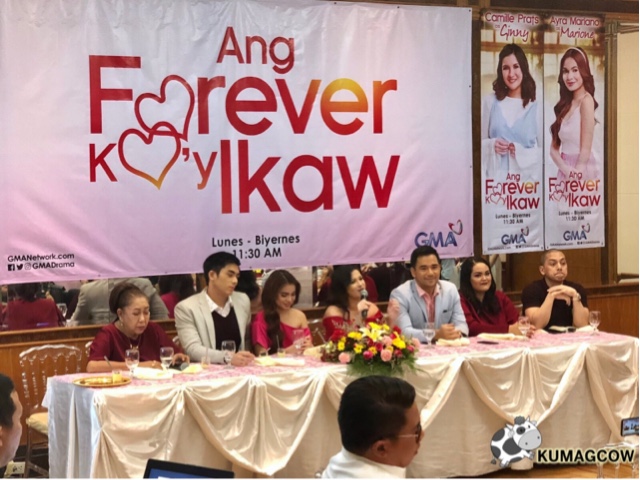 GMA is amping up their morning tine slot starting with this promising show called “Ang Forever Ko’y Ikaw!”. Topbilled by Camille Pratts and Neil Ryan Sese, they’ll make you swoon with their love story from Mondays to Fridays at 11:30AM. They will also be together with some of the most talented actors from their stable Bruno Gabriel and Starstruck’s Ayrs Mariano. They’ll be challenging a tough pairing in the other channel but I’m sure they’ll be actually putting up a good fight. Their premise, a love story that has got to do with fate, chances, love in unexpected places which would make viewers root for them right from the start of the show.

This is based on a true story of the relative of one of the writers. It’s like they had coffee, same flavor, same shop, sat in tables but never met. They also dined in restaurants, ordered the same food at the same time but never even saw each other. Then in one party, they were introduced, they didn’t know they lived in the same condo, both single parents and now want to keep their lovelife FOREVER, and didn’t know they were right beside each other, all along.
Now they go through a dating phase, the comedies included. They also met through alter ego accounts, kindred spirits but didn’t know they knew each other. GMA Entertainment Content Group and Marco Fundales’ concept seemed too true, until this love story that talks about destiny HAPPENED.
Their Director Jude Paulo Diangson says “It will be different because of the treatment, it will focus on light romance, but not shallow. It has substance and authenticity, that’s our target and it’s weired because I was able to watch this and felt it. The story is not complicated, easy to understand but not too conflicted.”

Ms. Odette Khan says “Well I want you to know that there is no acting involved, this is me and my daughter in law and I am so happy to be part of this. I will treasure this award I got for the rest of my life, we all know we work hard for this and I think it’s mine and no one can take it. The only kid I have passed away in this show and I don’t like her. Yon! Thank you to GMA 7 the best network ever!”

Neil says “This is my first time to be a romantic leading man, I’m not scary this time and I had to be more natural. I’m really thankful they chose me to play Lance. I knew he’s hopeful. The material alone is promising and we don’t have to do anything but just follow the process and hope it would reflect with the audience who will watch this show. Camille is pretty and fun to be with. I feel bad about the passing of Direk Maryo but the last time we talked it was about this project. He told me to get more good looking and macho, but I told him I can do that macho part though the good looks part is already as is.”
Camille adds “The challenge really is just toning down the intensity. I love romcoms because it looks effortless but really does have to do a lot with it. It’s a good thing even normal people can have a second chance, that’s what I want people to pick up from this show. I also believe in serendipity, in God’s perfect time you will meet your special someone. When I read this, it felt so familiar, my lines even felt like it in real life. It’s probably why Ginny as a Mom and her journey, I could totally relate with her. It’s not going to be gone in my life, it’s always going to be there. Vj and Nathan are my priorities, that’s where I pour because it’s always going to be part of my life. God has plans for us and I didn’t see parts of my life like this, but it came for me and my kid, I think that’s why we have this. We love Ms. Odette dearly, we even sometimes laugh so much we had to stop taping. Neil will be topless in one scene, so you have to watch this. The things you will see here can happen in real life, it would be easy to love the story because everything is relateable and simple just to be able to entertain. Back then I had to get raped and stuff but in this script we had to fall in love. Our director made it even easy for us to do this. I am grateful that GMA believes in me, this is a blessing to be in this show even if I just gave birth.”

Bruno says “I haven’t really loved enough people to know if serendipity is true or not but I’m sure there’s someone out there for all of us. As a follow up to Grind, this looks different because it’s younger, humorous, and we’re excited we got even more close. We haven’t had scenes yet (Camille) but happy to work with Neil because reminds me of my real Dad. Pretty much the same with Ayra, I would be happy to continue this love team with her. ”
Ayra Mariano says “It’s our first time to work with them, super happy to be with them on scene because you are not intimidated. I am so glad management gave us this roles and build our loveteam. I think this is what’s happening with out love team, I can work with Migo but I’m happy with Bruno. We still have people hoping for that to happen because of TOTGA, so anything goes.”

Kai Cortez says “I love Camille, but this has been the first time I worked with her in a series. I see a lot of things we have in common and as far as friends go, we’re good.”

Again if you’re up for a feel good light romantic show, then you should watch “Ang Forever Ko’y Ikaw!” on GMA’s morning slot at 11:30AM, March 12 right before Eat Bulaga.