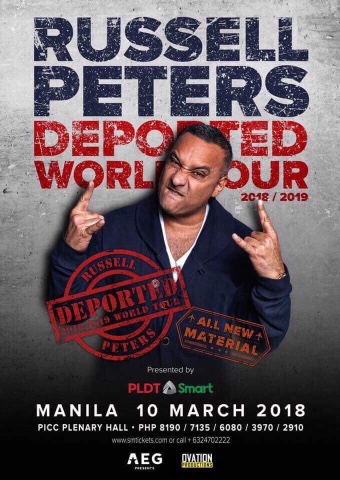 He's been in the business for 28 years and true enough, his controversial antics on stage has already got him in different parts of the world, making so much money on laughing about race, nationality and presenting it in a very CRAZY way (of course I'm kidding). The standup comedian I'm referring to is no less but our favorite bumbay (sans Sam YG that is) Russell Peters.

He's reached the country in waves, talking about how westerners feel and look at the middle east, Asians, yes even Filipinos. It's probably one of the reasons why his videos in Youtube don't only get thousands of views, but MILLIONS actually. And we're not even joking.

Well to give you a glimpse of this man who is going to be in Manila this March 10 at the PICC Plenary Hall, I won't be showing his video because it's going to be redundant, and funny, and you might think I'm a clown after this post. Thank you for bringing in the world renowned comedian PLDT and Smart! You've been doing this for years, I'm glad though that you're never going tired.

Remember he's not going to leave this town without making you laugh on Saturday. Make sure you watch him at the PICC Plenary Hall, he's not there to give you your individual diplomas (wink wink), he's promised not to bomb and just make you laugh and have a good time.

Share your moments from the show on social media by using the hashtags #SmartRussellPeters or #PLDTRussellPeters. But don't let the ushers spot you as you may go straight to jail if you take photos (collect 200 on GO). Haha I kid on most of the things on this post aside from the dates of the show. You may purchase tickets through SM Tickets at 4702222. This is produced by AEG and Ovation Productions.