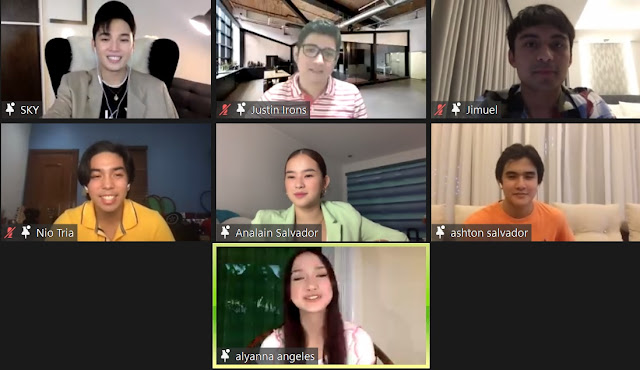 More artists are being introduced now as Star Magic and ABSCBN are ramping up their line of programs and the need for talents are evident as some of them have jumped ship (and we can't blame them either because they need to make a living). These guys and gals are promising but what we found out was... they were no strangers to the showbiz industry.

Jimuel Pacquiao is of course the son of boxing great Manny Pacquiao and Jinkee Pacquiao. Nio Tria is the son of character actress Cherry Pie Picache. Analain Salvador and Ashton Salvador are both cousins of teen king Daniel Padilla. Alyanna Angeles on the other hand is a former child star and is now embarking on showbiz now that she's a bit older of course. They were all very smart, eloquent while being thrown questions by the press and we did enjoy the evening with them. They will be now part of the GOLD SQUAD PLUS group together with other teen stars which they introduced a couple months ago. Being part of this wasn't that easy and some of them were really nervous, they were asked how they feel now that they are officially launched.

Jimuel says "I was kinda nervous at first but I'm thankful as I get to make a name for myself now and perhaps be off the shadow of my Dad."

Nio says "Being a part of this surprised me, and being a Kapamilya, I had to ask her about it and I wanted to do my best now that I am part of Squad Plus."

Analain says "When I first heard it from my Aunt, I was ecstatic. To show talent and pursue my passion for acting, I am also happy to know that I'm with my brother too."

Ashton says "Admittedly I was nervous and speechless about entering the industry, even now I am a little afraid, but of course I am excited to enter showbiz too."

Alyanna says "Well I'm very thankful that even if it is during the pandemic, we were given the opportunity to be part of the Gold Squad Plus."

For now, make sure you catch them on KUMU during Mondays and the shows they are planning to have with them soon. Thanks to ABSCBN PR for allowing us to get to know them. Thank you!