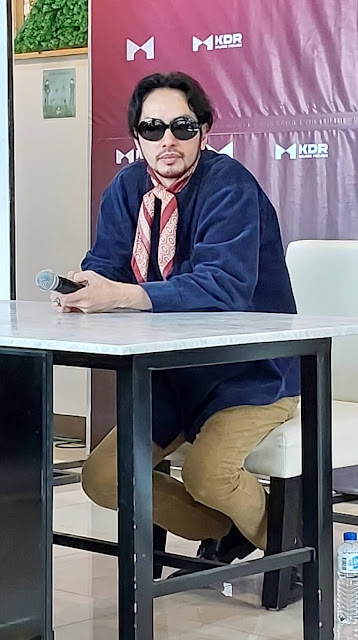 If you"re a fan of Rico Blanco and his brand of music, you're in for a treat as he's slated to have a concert this September 11th at the Araneta Coliseum in Quezon City.

It's been a while since he"s done this, but he's so excited to perform some of his greatest hits like "Umaaraw, Umuulan", "Your Universe", "Yugto" and those he did while he was still with Rivernaya. His iconic songs have been adored by generations of music lovers and he is still advocating love for Original Filipino Music (OPM) and Filipino musicians til now.

During this press conference, we asked him about what changes he's undergone since having a relationship with Star Magic artist Mariz Racal, and he says "Nothing really, it's not change that happened to us, it's like our personalities really complemented each other. We're just good together, romantically and artistry wise."
Asked if she's going to be at his concert, Rico says "She's probably going to try but I know she has work during those days and will be under locked in taping. She supports me 100%".
Rico is also busy managing artists via his own entertainment label called Balcony. It's his way of paying forward to the industry after a highly successful career in music. Among the artists he's managing is Ebe Dancel and Zild which a lot of people liken to his brand of music. He also laments how the generation now is discovering that he's got his own band, as most of the young kids probably have seen him in different shows on ABSCBN.
Here's a part of the press conference yesterday.
The concert again will be slated on September 11th, 2022. Tickets will be sold on July 1st at Ticketnet so go get them soon. This is produced by KDR Music and they also announced that there will be other artists lined up which they will also be putting up concerts soon. I'm excited about that!