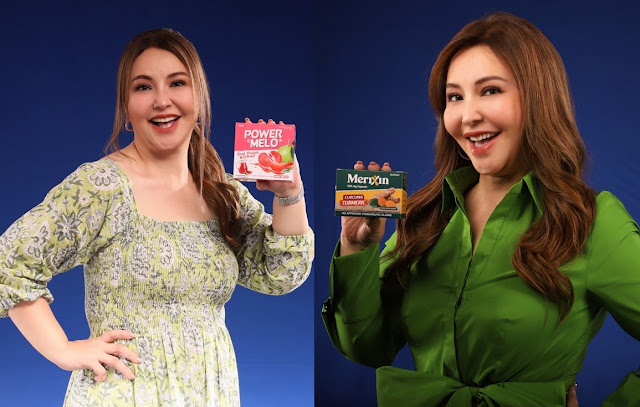 Looks like Small Laude's love for everything organic and healthy is paying off as she is now the face of POWER MELO Juice Drink and Merixin Turmeric (that comes in capsule and juice form). In grand ceremonies, she was welcomed to the Corbridge Group Phils. Inc. by no less than their President and General Manager German Panghulan in front of excited media covering the event.

For those who don't know, she's a very popular vlogger, socialite, entrepreneur. She used to believe that turmeric was just for cooking as she often has it in curry. She now knows its health and anti inflammatory benefits that would be good for the heart, liver, bones and lower the risk of cancer. She admits she's in her golden years and says that she wants her supplements to be conveniently taken and au naturelle. Since both of these are in dietary supplements and powdered juice form, it's quite easy to carry around or take after every meal. She also loves the fact that Merixin Turmeric 4 in 1 juce has calamansi and stevia as sweetener. She also wants people to be aware of its health benefits especially those that are plant based and organic.

I also personally got to taste the POWER MELO juice drink and it's a really refreshing drink without the guilt. It's also got that lovely pomelo flavor and tons of anti oxidants that you need to last throughout the day. Remember, if it is sourced from organic substances, it can lessen oxidative stress and prevent different diseases. It is also advised that you take this before a meal or early in the day as it takes time for vitamins to be absorbed by the body.

As you can see, she was so happy that Corbridge trusted her with these products. Now it's time you take care of your body and get the same health benefits Small Laude is enjoying with POWER MELO and Merixin Turmeric. It's available in 7-11 stores, Mercury Drugstore, Watson's and leading health stores in the metro. They are slowly distributing it nationwide so stay tuned and ask for it when you visit pharmacies/health stores soon.