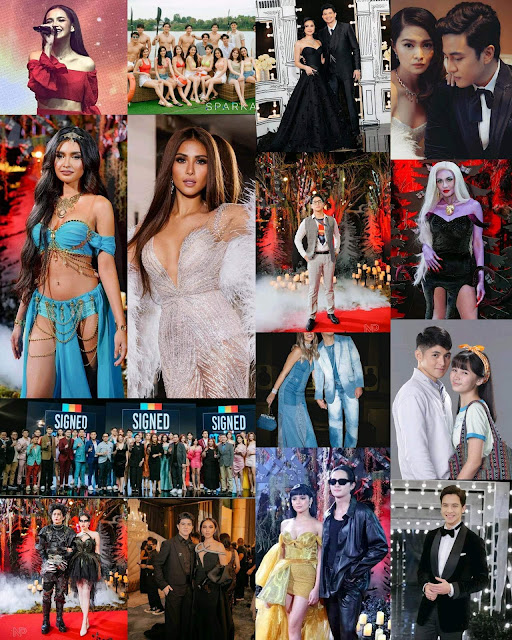 You've seen them all shine and sparkle this 2022 and this year, it's even gonna get bigger as fresh faces and more talented artists join SPARKLE, GMA's talent management division.
According to GMA's Senior Vice President Atty. Annette Gozon-Valdes "I hope to continue leading SPARKLE and be able to meet the demands of the post, to ultimately be of service to our stars and the network!"
Behind her is a powerful team that includes Ms. Joy Marcelo the AVP for Talent Management, Sparkle's Senior Managers Tracy Garcia, Vic del Rosario, Daryl Zamora and countless managers, handlers, producers and specialists who have been making it possible managing the careers of over 300 Sparkle artists. They have been under the one and only star builder Mr. Johnny Manahan who has always been very hands on since Artist Center's rebranding.
In 2022, Sparkle's artists Sanya Lopez headlined "First Lady", Ruru Madrid on the other hand did swashbuckling hero "Lolong", Barbie Forteza, Julie Anne San Jose and David Licauco did "Maria Clara at Ibarra", Kylie Padilla did great work on "Bolera" and the one and only Alden Richards did the "Start-up PH" show among countless hit series on the network. These men and women + artists have worked hard to make these programs successful and currently, plans to have an even better performing 2023 is brewing!
Aside from the hit shows, Sparkle artists such as Heart Evangelista, Alden Richards, Gabbi Garcia, Khalil Ramos, Julie Anne San Jose, Kyline Alcantara, Camille Prats have had the trust of different brands, both local and international surprising even their own management.
Several events showcased Sparkle's talented stars including the Thanksgiving Gala and Charity Event held mid year. They also launched some of the freshest artists and love teams through Sparkada through their music video during summer. In the latter part of the year, they also did "The Sparkle Spell" where their favorite GMA artists came clad in different costumes impressing people of different demographics, events that all garnered millions of views and reactions. During Christmas season, they gathered at the SM North Edsa SkyDome for the year ender "Sparkle Fans Day: Isang Pasasalamat" where they got to personally thank their supporters in person. Over 70 Sparkle artists entertained 1400 people during that day which included me in the audience. This kept a lot of fans and onlookers glued to TV sets across the country.
They continued to grow their roster of talents by acquiring new talents and renewing contracts through their Signed for Stardom events. We got to take to a new generation of actors, actresses, hosts, up and coming stars and your favorites. I remember interviewing THEA TOLENTINO, LIANNE VALENTIN, LIEZEL LOPEZ, KIM PEREZ, THEA ASTLEY, DUSTIN YU, PRINCESS ALIYAH, JADE TECSON, SKYE CHUA, HALEY DIZON and MARCO MASA among others.
Some of the artists got also immortalized at the new Sparkle Wall of Fame which will grow even more as Sparkle artists join in the coming years. Sparkle's social media accounts have also exponentially grown in recent years which includes their YouTube channel and TikTok account that have lead views and follows among entertainment accounts in the country. This is just the tip of the iceberg as they've got plans to work with different digital streaming platforms and international brands with their new world class shows bringing multi awarded actors and actresses from their roster and give them a plethora of opportunities outside the country too. While they continue to hone the talents of their artists via workshops they host, and the different shows they make on the channel, Sparkle is going to continue their successful run to make sure you get a dose of these top of the line shows, titles and concerts to audiences not just in the Philippines but elsewhere in the world!
For more information about these artists and shows, visit their website GMANetwork.com and their social channels today!