TIRSO, BOBOT, BOYET and LOVI for SOME KIND OF VALENTINE 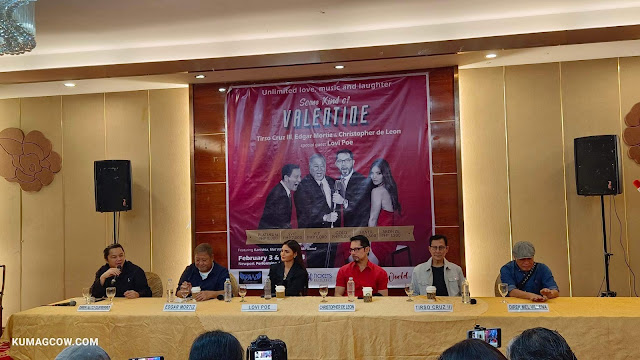 Looks like the memories will come crashing back in as SOME KIND OF VALENTINE will be showing at the Newport Performing Arts Theater this coming February 3 and 4. This will be headlined by iconic actors Tirso Cruz III, Edgar Mortiz, Christopher de Leon and the gorgeous Lovi Poe. Aside from these guys and lovely lady, they will also be featuring Kanishia, Mel Villena and the AMP Band.
Director Alco Guerrero says "We have lots of realizations and the 15-20 piece band will surely be playing the classics so I'm excited to do this."
Bobot Mortiz adds "The last Valentine show I had was with the bad bananas, and we also introduced Zsazsa Padilla at the time, this time we have Lovi. Hopefully our fans, we will have to dig up some of them, would be able to watch this two night concert."
Christopher de Leon says "This is gonna be filled with laughter, lots of fun and will have familiar songs from our time. There will be duets, it's gonna be wacky and real singing. I promise, it's going to be fun!"
Lovi says "I know, I was a little afraid to stand with icons on stage, but it's been a while since we have performed so this is the perfect time to celebrate love with everybody."
Sir Tirso says "It'll be so much fun because we will have a different arrangement for these songs and there are so much songs that we plan to sing, from 60's, 70's to 80's hits, the classics and you'll get to reminisce how we enjoyed music since then. There will also be comedy portions in between songs which I am sure you'll surely enjoy!"
Tickets cost 8K for Platinum, 7K for SVIP, 6K for VIP, 5K for Gold, 3,5K for Silver and 1,5K for Bronze. Head on to SM Tickets to get them all and enjoy the show!