I arrived at the Tee Radio studios in Cubao, Quezon City a couple of weeks ago to confirm great news about this great partnership they're having with established record label Ivory Music. Now to tell you frankly, I've only seen Tee Radio publish crazy content online with viral videos, appearing almost every day on my Facebook timeline but didn't know they've set up a real deal online radio station with a whopping 6 Million plus strong community to back them up. During my visit, they had local band Eevee being interviewed and broadcasted across their social media channels, their official website http://teeradio.net/ and those who are live streaming from their apps on the App Store and Google Play. It's through a show they properly call "It's Tee Time!".

It's Tee Time will be shown twice a month (Fridays) 5PM to 6PM. The show will discuss about personalities, music, the latest trends and everything that's interesting on the Internet. It was a little funny on how they did the show when we were there because it was like they were just hanging out, like friends having beers and snacks while being broadcasted live online via the official app, the website and on their popular Facebook page. Their plan is to feature more artists in the coming months, and with the partnership with Ivory Music, I don't think they'll be running out of people to talk to in the coming months.


Eevee Band has just released their newest single "Gisingin Mo Na Lang Ako" (Just Wake Me Up) under Ivory Music and Video. Aside from that, they've got "Gusto Ko Lang ng Girlfriend" (I Just Want a Girlfriend) and "Sarap Maging Single" (It's so good to be single) which they had released a couple months back. The band is composed of Enzo Villegas who's doing lead vocals, Paolo Seguna on lead guitar, Gianne Garcia on bass guitar and Patrick Anchinges on drums. They're a pretty rowdy bunch and are no strangers to the band scene. They started their career winning in a band competition in 2009 and now that they're part of Ivory Music, they seem to have been enjoying this journey.

Their music is Alternative, but the songs are quite reminiscent of reworked ballads because mostly all of the lyrics talk about love, relationships, its failures and picking up the pieces. It's that weird good feeling, you just need to listen to it to appreciate it. Eevee Band's tracks are all available on online stores like Deezer, Apple Music and other digital stores internationally. Expect them to be touring around malls pretty soon, request them on radio if you want to listen to them ahead of everyone else.


Here's a short interview we did with Eevee Band! 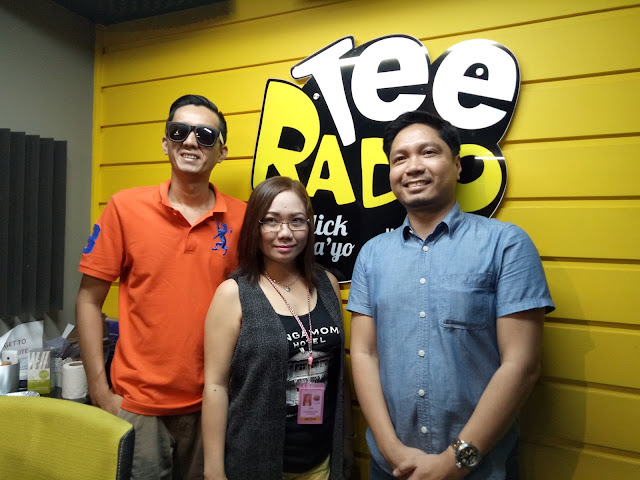 It's so nice to know that a well known industry stalwart is now working with an online portal to reach more people to tell them about up and coming bands, artists and fold it into a show that is light, fun and can relate to a generation that is hungry for it. The millennial, the teens, have a long way to absorb what the world has to offer. If that's art, music, or experience, they'll get a part of that today. They consume most of the information we put out there, now all they've got to do is see it live while it happens no matter where they are. So if you're not too busy, please visit Tee Radio via http://www.teeradio.net or their official Facebook page https://www.facebook.com/teeradio and Ivory Music and Video's https://www.facebook.com/ivorymusicph/. It's all there, all it takes is one click!