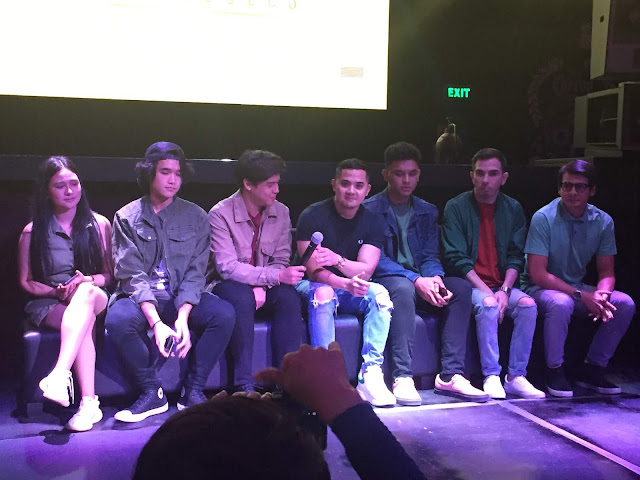 In a way, this is very relatable for people who didn’t get the chance to show their love for someone. Spoken word poetry has been a very ingenious way to be an outlet, to foretell love with a play of words, which sometimes are effective, sometimes not. One thinks how he could just look from afar and hope he gets noticed by the lady he so admires, one who wants to also protect her from other guys, some situations he wouldn’t have any control over. He hopes his efforts would bear fruit, one day, someday.

Khalil Ramos says “Good evening to everyone, I play Carlo here. It was important for me to study, at first the look and screen test, we already talked. We rehearsed this kind of poetry, it’s rhythm, it’s like rap and I had to do it right. The character is one of many, like people who want to profess love. Carlo is intimidated with Elisse, she is like the dream girl, out of his league, he went through a lot. It has so much to do with his identity, his purpose in life, he is very introverted, he has been bullied and has dealt with his friends and family a lot. Emotion wise, I have my own struggles, it is natural for most of us. For me it’s what I wanna do, about my future, I got it from there. I find myself looking at my own inner purpose, my relationships, my friends. I wouldn’t say I wanted to quit, it was just stressful and it will break you. Knowing yourself, I have had one sided love, in highschool I felt his frustrations. It was an immature love, heartbreak. I couldn’t tell you the story, I might spoil it for you so please watch it.”

Real says “Some of the performances you have seen a while ago will be put on screen. I came from trad broadcasting but understanding the generation involves producing for the new audience. TV as we know is changing, this is familiar, this is relatable, when we saw Ampalaya Monologues three years ago we planned this out and is now streaming. It is the hunger for new kind of entertainment, they have a different kind of thinking and it is so nice to see on the digital platform. The nice thing about this is when we pitched this to iWant, they gave us builds about family, a person’s journey, when we developed this we delved into problems, heartaches of the new generation and you have something to learn from it. There is value in pain. Generally the series is about the bitterness and pain, you wouldn’t experience love without it.”

Isiah Dela Cruz, Alex San Agustin, Henz, Mark Ghosn will also be in this episode. Real Florido has done a lot of remarkable films in the past, and having top caliber actors like Khalil and Elisse in this iWant digifilm, this would be another nice piece to watch. This is an iWant Anthology, a different show every week so stay tuned!