SHERYN REGIS is BACK : Back To Love! 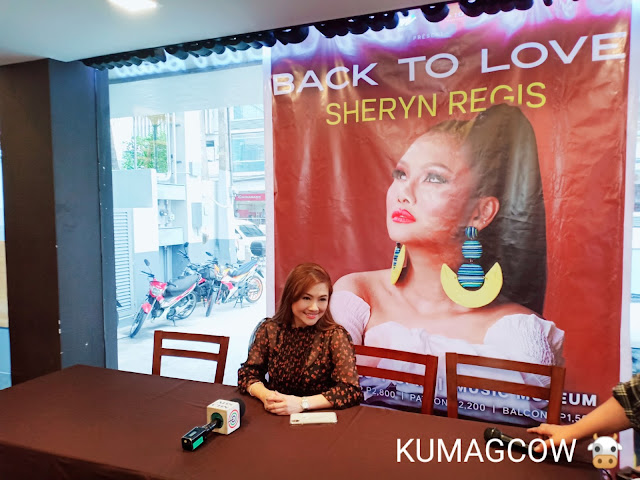 I remember how I always used to sing Come On In Out of the Rain in the shower couldn’t hit the last few notes because yes, Sheryn Regis is a legend.

The Crystal Voice of Asia is back in the Philippines and yes she’s doing something she LOVES which is singing and performing on stage. So they aptly named her comeback concert BACK TO LOVE: Sheryn Regis. Undoubtedly, she is one of the most powerful singers this country has produced. I did root for her during a singing competition she joined years back. She chose to live a simple life and live with her family, to take care of kids in Houston Texas. She’s had a round of Cancer scare, depression, but she has mustered strength to overcome all these trials and healed wonderfully. After a while, she worked with TFC shows in the US and enjoyed raising her kids til now that they could fend for themselves. She knew what she wanted to do, asked permission from them and they gladly tell her to go for it. She went back to the Philippines and signed with March On Entertainment Inc. The concert will happen at the Music Museum on February 28 8pm. This will be directed by Alco Guerrero and will fortell Sheryn’s life story, all expressed in music. She promised to perform several of your favorites, and introduce a brand new Sheryn Regis too.

She will also have her Free To Love Concert in Winnipeg Manitoba Canada on Valentines Day, another one in Tallahasse, Florida on the 8th and Steinbach Manitoba Canada on the 15th. It will be a pretty busy February for her too as hey will release a single during the 2nd Quarter. She also hopes to go back to acting, a craft she loves too. For those in other parts of the world, she’s going to have her own YouTube channel to document her daily life. She’s Sheryn Regis, and she’s back... you better get ready!

Tickets are sold via Ticketworld.com.ph, go get them before they run out!