Rey Valera and Joey G for The Acoustic Playlist 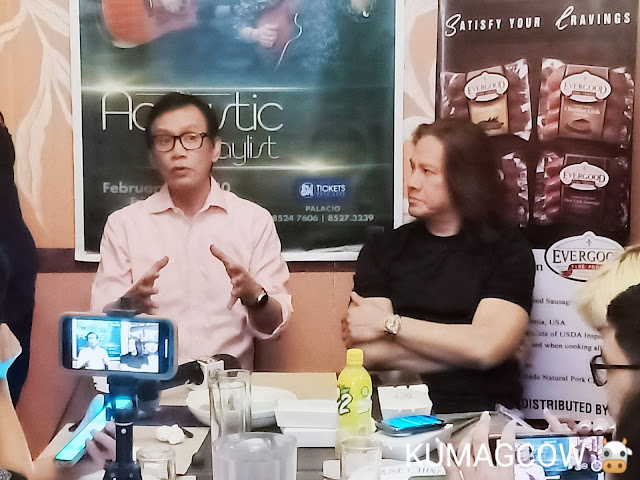 Valentines will be a little sweeter as singer song writers Rey Valera and former Side A frontman Joey Generoso will be coming together in a concert called "The Acoustic Playlist", an unusual but very interesting combination.

Joey G says "Ana Puno suggested this combination and I am excited to do this with Rey Valera. It's called Acoustic Playlist and we will have duets, new things we could do because we haven't had a show before. I still do gigs at night and couldn't join Tawag ng Tanghalan. We both like the band setup, we both like love songs, we figured we could do it both. Who knows, we might figure out a dance number (he kids). I loved singing, I love playing instruments, my family is all inclined with music. I always learned it when an instrument arrives at home. It's good being a solo artist now because I handle my own time. I personally decided to do this five years ago to have another story. I didn't have any bad things with Side A, we're too old for drama. Wyngard used to tell me it will happen and it did happen, I had hesitstions but when I did it I saw myself in a different light. It's exciting to work with Rey because I was always fond of his compatriots like Rico J, Hadjii, they had a different kind of music. I would like to work with new artists but mostly with sons/daughters of musicians before, even Moira. Music is never ending studying, I would like to explore other genre. The type of songs for me are different because I decide most of it, not when I was in a band where 5 people had to butt heads. When I did release my first single, iTunes got it on number 1, we didn't go far from my sound. Fans are expecting. "

Rey Valera says "We have song choice in Tawag ng Tanghalan and it's where we experiment a lot. Given a challenge to make it funny or put it on a different situation, I would accept it. Dancing? I could do it, but I just got out of the hospital and I might fall off the stage. Joey has a reputation of being so good on stage, womanizer (he kids) but I will adjust on his kind of songs, I will have to introduce it to myself. I have to make millennials know of me, we could meet in the middle of our music. Unlike when I do it with Rico, Joey has a different audience. I did get to be with him in some bands but I had no idea how he is as a solo artist. Joey G, Aiza and Me always make stadiums full, we will get to try this out in our homeland first before we try to put this on a tour in the US. Our song choices are not that different, but it is how we play it. I am more masa, he is more kolehiyala who can now afford. We now are entertaining a different generation and I don't have to adjust too much, we just have to project an image worthy of that concert. We have to practice song progression, we are both writers and we arrange music, we do lyrics, different jobs and realize there are different disciplines not unlike here where we do everything ourselves. One thing I have learned in life is if you are controlling, don't if you can't, God willing we will be there. I felt I was going with Rico, to be next, only a matter of time and you feel your circle is becoming smaller, my time here is just a bonus."

The concert will happen on February 7, 2020, Friday 8pm at Palacio De Maynila. You may call 84702222, or at the venue 85247606, 85273239. They will have Jona as guest, will hold their US Tour on May 1, Los Angeles , then Las Vegas, then Atlantic City. Maybe more soon, to know more details about the concert, check dates and ticket prices over at starmediaentertainment.com.