TV5's Offerings On Wattpad Presents This 2015!


TV5 this 2015 will be giving you shock and awe as they come out with new series via Wattpad Presents that you will surely love! During the launch, we saw one of Eula Caballero's love interest in last year's staging of Almost a Cinderella Story which had a very successful run with Carl Guevarra. They're going to have another Wattpad Presents series but it'll be now together with former PBB Housemate Bret Jackson, another prized male star in the stable of Viva. I think they'll be doing a couple of shows and more in the Kapatid network and it's Bret Jackson and Eula Caballero's turn in this week's mini series entitled "Trip In Love or Fall In Love" which sparked quite a buzz already on social media. There's no doubt that these good looking lads are giving Wattpad Presents the needed exposures they need and it shows on social media reactions lately. They love the pairing, they love the stories and they can't wait to see how these all ends. This year though, Carl will be paired with Isabelle De Leon, one of TV5's Trenderas. Will the formula work for their show you think?


Bret Jackson is no stranger to these programs because he's also starred in the Kim Chiu - Xian Lim movie "Bakit di ka crush ng crush mo?" and pretty soon will be part of a film opposite with rumored real life sweetheart Andi Eigenmann. By the way, you should watch his guesting during Papa Jack's show because he'll have a tell all including relationships he had recently. He's actually a very nice guy and we sat down with him a but during the TV5 first quarter program launch.

Bret says "This show is about love and how to fall in love. It's about a boy who falls in love with a Japayuki, I just learned that term now. He had amnesia but this will prove something like whatever the mind forget the heart remembers. The meaning was so okay. When I was doing it, I felt like the character, a bit bad boy, a little chick boy, (giggles), admittedly, I used to be like that before - so I really kinda related with my character. It was time to bring the old Bret out, the highschool Bret. It was alright. The real Bret today though was shy, but not that much. Some days I want to talk, some days I'm introvert. The plot of the story, I really kinda like it, but then you think it's really a Wattpad story and it's usually a dream type situation. You get into an accident, you got amnesia, you get hit in the head with coconuts but you don't die. Then you get amnesia again, so it's totally fun! It comes with the direction of the Director. Our director here is really good, he was just there to guide us in every bit. We start at 4AM then end at 6AM but it's all good, we did it. I want to work with comedies but I think we're going to do action and more workshops. I'm shooting You're Place Or Mine with Andi Eigenmann. We're doing this with Andrei Paras, it will be shown around March. I'm starting this year with a bang, James Reid really ask me to join so I tried. After "Talk Back and You're Dead" the movie, I went through workshops and now a ton of shows. This is my first time to be a lead character in a show and I love it now. Eula helped me a lot, this is my first time on TV and she was so good, we had chemistry. I want to work with a lot of people, like Mac N Chiz, a cop, or a gag show. I never had plans to do this ever, but you know what, I just had to try it out. I wasn't taking care of myself before, I'm turning my life around and I think I'll even make an indie album soon with James Reid... whatever works, I want to have something new in the music scene, like RnB and something that people would like. Tagalog, English, Bisaya, I can do it. I've been getting my first drama scenes, it's all okay... I'm getting a lot of intrigues, I just answer honestly. That's who I am."

I've seen Mark Neumann since his Artista Academy days and have sternly supported whatever he's doing. He's destined to make it in this industry because he's a good guy. Of course, you've probably watched him in "Mr. Popular meets Ms. Nobody 1 and 2" and that took them in a whirlwind of sorts as their fans loved every bit of it. I think this is officially the only Wattpad series that had a sequel and if that doesn't convince you that they're doing good things in this side of the Kapatid Channel, Mark Neumann will be paired again with lovely Shaira Mae in "I'm In Love With a DOTA Player!". It's the ultimate DOTA players dream, that aside from the mean things they do behind the keyboard, they'll have a full love story blossom like a "Monster Kill" was happening.


Just like the rest of these series, they will be seen weekdays at 9PM on TV5. If you don't like LOVE stories, and dig a bit more of an older, more mature genre... they've got you in mind with this Jasmine Curtis starrer called "House Full of Hunks" together with Vin Abrenica, Charlie Sutcliffe, John Spainhour and Albie Casiño. I know ladies, why didn't they include me! Hahaha. Anyway, it's like a Makati girls dream to be in the midst of demigod bodied men, now only if I ate and worked out like them and turn out to be this bulky, I'd fit in the cast that Jasmine would also love. Enough about dreams haha. Anyway, this is going to be a riot! Who is she going to fall in love with? Who is she going to connect with if she's got tons of choices in that house she's supposed to live in. Care to pick one? 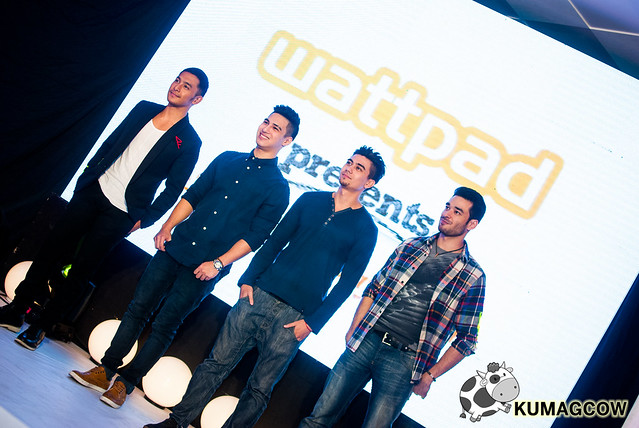 They're all yours for the picking. Come and watch all these Wattpad Presents mini series and see why love can so normal in so many situations. All the best with TV5!