Manila, Cebu and Davao with Boyce Avenue and Moira

Hey lovers! It looks like you music fans are going to have a treat because international sensation Boyce Avenue and local sensation Moira are having back to back to back concerts in Smart Araneta Coliseum, Cebu's Waterfront Hotel, and Davao's SMX Convention center.

Boyce Avenue's Alejandro Luis Manzano, Daniel Enrique Manzano and Fabian Rafael Manzano say "We will play a few songs from our new album, some of which we have never played before. This is putting pressure on us, we're both busy but if we can find a way we could put together I think we'll be excited to do that. It would be a cover and hopefully pull it off in one cover song, ideally more passion and find the right song. We want to still put our stamp on it and if that's an obstacle, we can work it out. We're just meeting her, hopefully a duet, who knows what would happen in the future. We never sung anything Filipino yet but we want to connect with the emotion, to feel it first, hopefully soon. Someday. If there is some that we need to cover we need to be honest and give fans variety, not too many old songs and keep people on their toes. So we can also give it our own spin, not an exact science because it's just the feeling. In the early days, we were hurt when we were being said that we did it better than the original, I didn't think it was a huge complement. We stay true to that, we need consistency, we need to sound like us not just the original. In some ways it has been better, some worse, it depends on the generation. Now we don't have physical cd's and just digital, it happened in social media and we get to have the journey with our fans. It's a balance, thankfully we are successful in transitioning in these technology, now we can connect with people. We are greatful for Youtube and social media. If we did an original, lyrics would be important, the key would be finding a song that have emotional content to it and not just a pop song. It should have a message, a guy to a girl, a girl to a guy, things like that. At the moment we don't have any plans yet but if we get to see more artists, it would be really something we can work out. It allows us to see more of them. We have the drive, we have certain moments where we lose a sense of balance, we have to remind ourselves how many supporters and how we were 10 years ago. If you have that mindset, it's absolutely not to be taken forgranted. We want to do a lot, but we have to fly a lot since we are doing a Cebu and Davao leg. There's a couple different types of covers, some odes to musicians that inspired you. June 2 in Waterfront Hotel and June 3 at the SMX Convention Center in Davao. Tomorrow we will be at the Smart Araneta Coliseum so see you there! 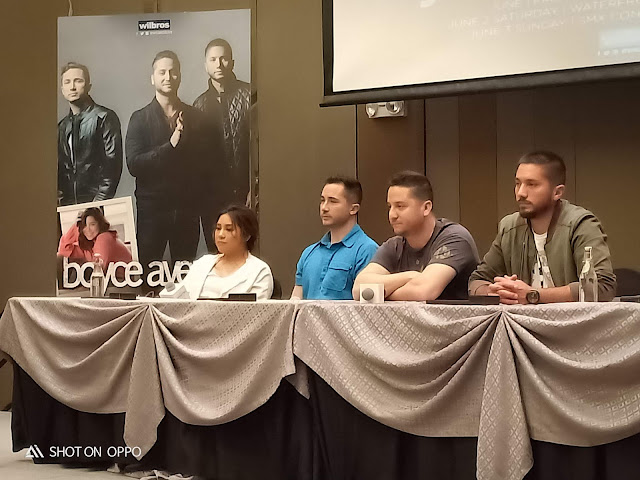 Moira says "I want to do covers that they have already done, even if we do an original I think it would be fun, it would be great because they're good. Everything is a hit for them, I am a bit nervous. I got a call one day after my concert, they told me it will happen in June and being with one of my influences. I needed time for it to sink in, tried to prepare guitar numbers, stay in the moment because I'm a little too shy and performing with them will be a big preparation. I'm nervous, I hope I get to sing 10 songs."

Go get your tickets via Ticketnet, Waterfront Box Office and SMTickets. They won't be here too long! Hearing and seeing them live would be a good thing.